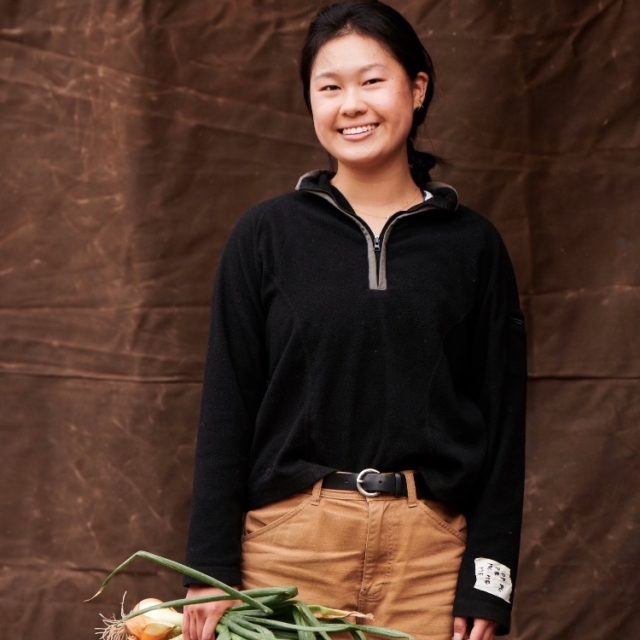 Yu-Shing Ni is a first-generation Chinese-American born and raised in Los Angeles (Tongva land), as well as a daughter, sister, food justice advocate, and beginning farmer interested in the intersection of food justice, cooperative land stewardship, grassroots advocacy movements for food and farm system change, and increasing cultural responsiveness in food policy and programming. After completing her B.S. in Global Food Security and Ecological Agriculture at McGill, located on traditional Kanien’kehà:ka territory, she apprenticed on two small-scale organic farms in Northern CA and Central Oregon and was met with the challenge of addressing the gaps that weren’t being filled by local farm-shares and markets despite high demand for culturally relevant foods. Her upbringing, which was steeped in traditional Chinese medicine, and her belief that people shouldn’t have to compromise between values of ethically-grown, nourishing foods and eating culturally significant meals–combined with the amazing seed saving and breeding work currently being done by AAPI farmers–drives her current vision to collaborate in providing those Asian heritage crops and herbs to meet the dietary and cultural needs of AAPI folks, connect through multigenerational storytelling, share meals, and in turn strengthen community resilience, food sovereignty, and cultural revival and preservation. When not farming or engaging in food justice activism, you can find her making pastries and bread at a local bakery, cooking for/with family and friends, and exploring natural surroundings via hiking boots, two wheels, climbing shoes, skis, or bare feet.