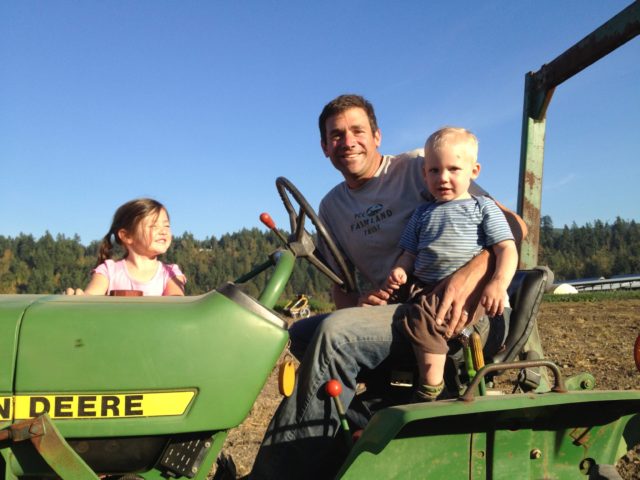 Dan and Kim Hulse began farming vegetables in Enumclaw in Western Washington State in their mid-twenties. They established Terra-Organics on leased land as a produce home delivery business with a CSA model. After two seasons, they decided leasing was too impermanent and looked for opportunities to buy land. Unfortunately, farmland was selling for $20,000 an acre, which they felt was not feasible for them as beginning farmers to afford.

A couple years later, Dan spoke at a Pierce County forum on the challenges young farmers face in searching for farmland. An audience member, Emma Ford, owned a 100-acre dairy in Orting, Washington. Her husband had passed away and her children were not interested in farming, but she wanted to see the land stay in production. She approached the county who connected her with PCC Farmland Trust and Washington FarmLink. The groups together decided to break the 100-acre dairy into 3-5 smaller farms.

Dan and Kim approached another farming couple, Amy Sills and Augustine Moreno, about working together to purchase one of the farms. In 2009, one year after the forum, the two couples closed on the purchase of a 40-acre farm with two acres of the dairy’s outbuildings and formed Tahoma Farms. Emma Ford sold the other parcels to two conservation buyers committed to seeing the land farmed.

A conservation easement on the land made it newly affordable to working farmers. The land was zoned for 10 residential units with 10 acres each with a fair market value of $2.1 million. The value of the easement based on traditional language was appraised for $1.1 million. The deal was structured as follows:

This successful model established a foundation for three different farming operations: Tahoma Farms, Little Eorthe Farm, and Sanford’s Farm. PCC’s work with Washington FarmLink ensured a selection process that identified motivated farmer-buyers with a high probability of success. The outcome was a dream come true for Emma Ford, who according to Dan, “was clearly invested in the land and the community, and felt like she was fulfilling one of her deceased husbands wishes to keep the land as productive farmland.”

By partnering with young farmers in the role of conservation buyers the land trust only needed to raise $1.1 million to permanently protect property which sold for about $2.3 million.

Permanent land tenure has allowed Terra Organics and Tahoma Farms to establish perennial raspberries and other projects they wouldn’t have started on leased land. Their CSA has grown to 1,300 members.