The compounding issues of dangerous farming conditions, changes in weather patterns, and a lack of access to water are felt more strongly by small, diversified, and BIPOC farmers, and lawmakers must find pathways to support these farmers.

Young Farmers Board Member Kellee Matsushita-Tseng is the assistant farm garden manager and instructor at the University of California Santa Cruz Center for Agroecology. At the 30-acre, certified organic farm, Kellee and their colleagues grow a range of different crops, including row crops, specialized fruits, orchids, and other flowers. Educational programming is also offered on the farm. Kellee says that climate change has changed the way that they teach and train others to prepare to farm, and they urge lawmakers to find pathways to support small, diversified, and BIPOC farmers. 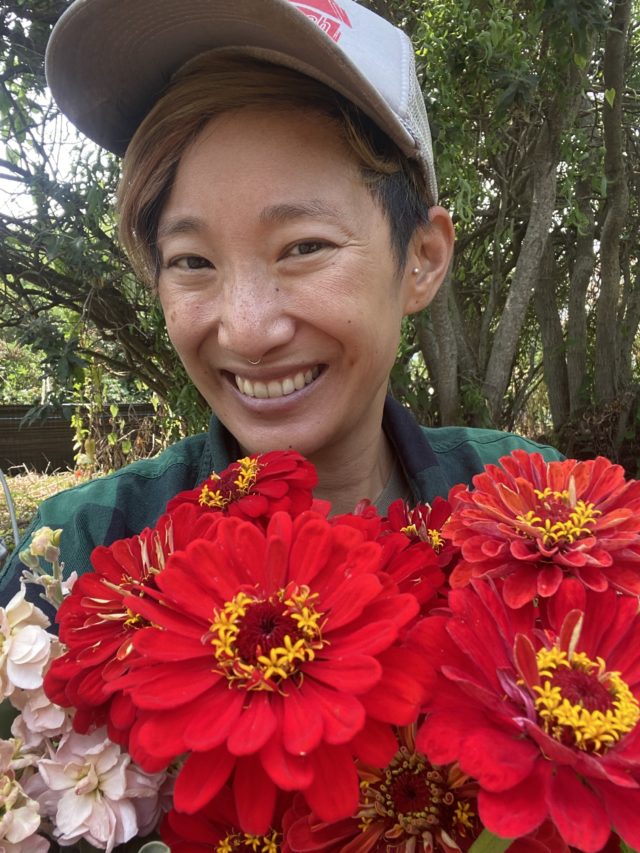 Climate change is resulting in dramatic and unpredictable shifts in weather patterns, making it difficult for farmers to establish cover crops. Extreme fluctuations in temperature also makes it also hard for Kellee and other farmers to make decisions around their farms and manage crops that are temperature sensitive. Kellee notes that people on the west coast have difficulty accessing land with reliable water access, which is especially crucial given that historic droughts are now expected to occur annually in states like California. Land prices in California are already so high, and there is a tight market for land that is becoming more difficult with climate change.

Wildfires also pose a significant threat to both farming and physical health on the west coast. Kellee says, “I know people who have to farm outside while wearing respirators. I know farmers who are local to this area who have had their farms burn down over the past few years, including equipment, infrastructure, and irrigation. That expense in trying to recoup and recover your systems when you’re already barely making it work, especially as a farmer of color, is so hard.”

As an instructor, they’ve had to change the way they train others to farm. There isn’t always a clear answer on how best to navigate climate change as a farmer, but Kellee emphasizes the importance of biodiversity on farms. For example, a pest outbreak targeting a single crop variety won’t have as devastating of an impact on a farm growing a diverse range of crops as it would a farm that practices monoculture.

Building on-farm resilience is critical for farm survival. “When we teach farming management, a lot of the principles of what we would originally teach are the same, but they just become that much more important. I’m trying to harp on these principles that have always been good practice, but are so much more critical for survival now.”

Kellee wants lawmakers to know that small farmers face more precarity as climate change worsens. The compounding issues of dangerous farming conditions, changes in weather patterns, and a lack of access to water are felt more strongly by small, diversified, and BIPOC farmers, and lawmakers must find pathways to support them. Kellee noted that farmers of color are more likely to be using sustainable agriculture practices than other farmers, and that farmers like them are creating and using the systems that will allow for regional food systems to be sustained, resilient, and robust during crises. They want people to understand how fragile the food system can be, which is why it is so important that regionally produced and locally grown foods are supported by strong and equitable policies and programs.