By Hannah Moser of Forager Farm

When I was young I wanted 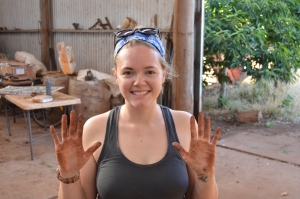 to be many things: an architect, magazine editor, zoologist, but a farmer was not one of them. The closest idea of a farmer I had was my grandpa. I knew he had cattle, and a barn, and a lot of farming equipment, but eactly what he did I was unsure.

So I followed the typical path of graduating high school, talking with guidance counselors, and deciding what major I would declare in college. I thought something business related, but knew I had terrible math skills. I ended up pursuing a degree in Public Relations and Advertising.

While in college I started experimenting with cooking, which in turn meant I started to learn more about food; where it comes from, how it’s grown, the number of ingredients, organic or GMO-free.

I was immediately appalled by our giant, industrial food system; the lack of culture and diversity, the lack of understanding by the majority of our country, the lack of respect to our land and our animals. It just wasn’t right in my mind.

I began to carefully make food purchases and garden with my fiancé Jonathon, then boyfriend. I shared every bit of knowledge with those closest to me, hoping to find common ground to make a change in our food culture, but I didn’t find it. I thought that I had, and I thought that I was satisfied with “voting with my money” so to speak. But it wasn’t until my six-month stay in Australia learning every detail of growing organic vegetables on a mid-size scale and delivering locally that I found it. 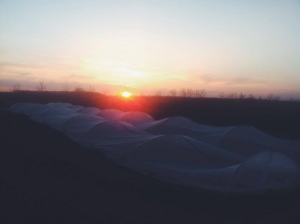 Food was what fueled me then and food is what fuels me now. Food is why I have two dairy goats. Animals that I knew absolutely nothing about, but wanted to learn.  It’s why I daydream of my own milk parlor full of goats to milk to make artisan goat’s cheese with. Food is why I tirelessly feed my sourdough culture so we can have fresh, homemade bread. Food is why I’ve become a vegetable farmer.

But even more than food, it’s people. The sense of community that comes with knowing where your food comes from is insurmountable. At Forager Farm we’re constantly focused on reviving our food culture and growing our food relationship. Although it is our first year, we already feel a sense of connectedness with our members whom we’ve yet to meet.

I’m not sure there is anything better than handing off a heaping box of fresh vegetables you grew with your own hands to an eager customer. The only thing I can think of to be better is what they express to you after they’ve cooked with and eaten it.

Before our time in Australia, I always fantasized of leaving North Dakota, living in different states and experiencing things I thought I couldn’t in my home state. Once we returned back stateside, it didn’t make sense to be anywhere else.

North Dakota has a fairly unsaturated market when it comes to local food producers. That’s not to say we don’t have a local food movement. We have a thriving group of passionate folk set out to change how we eat. We knew if we joined them now we could be a part of something bigger.

And we’re doing just that. So far this growing season we’ve had a May, that’s acting like April, a very slow beginning. However, this past week our temperatures have finally warmed up and today we planted and transplanted like crazy. And we’ll do the same tomorrow and the next day and the next until we’re ready to harvest for our first week of deliveries.