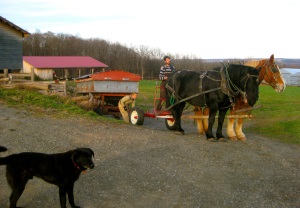 Good Life Farm is perched on a hill on the west side of Lake Cayuga. On a chilly fall evening, I watched Melissa Madden instruct an employee on the art of driving two draft horses towards the turkey pasture. The last rays of the day’s sunlight illuminate the land, and it’s easy to see why Melissa and her husband, Garrett Miller, chose this life.

Melissa and Garrett followed their own paths of farm apprenticeships, and met in 2006. By that time, Melissa had been working on farms for six years, and Garrett had honed his carpentry and sustainable living skills through years of carpentry jobs and an apprenticeship on Turtle Island in North Carolina. Together, they traveled to Western Wisconsin, where they studied permaculture and learned what practices resonated with them. 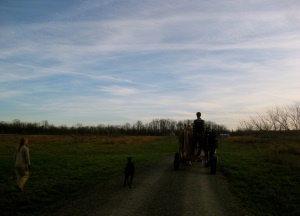 In 2008, Melissa and Garrett moved back to the Finger Lakes, took full-time jobs, and purchased their land nine months later. Although they had to take on a great deal of debt to purchase their property, owning their land was crucial to their vision. In order to grow perennials and follow their permaculture principles, Melissa and Garrett needed land for the long-term.

By 2011, Melissa had quit her job, while Garrett remained working off-farm full-time; however, they are equal co-managers of Good Life Farm. Garrett’s carpentry training has been invaluable to the farm’s development, as new buildings, including six high tunnels, two barns, and poultry coops, go up each year. 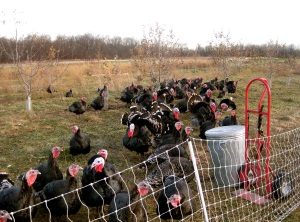 Permaculture principles are behind every operation on the farm. “Fruit trees mixed with poultry and asparagus works really well, and yields well per acre, in terms of both finances and ecological services,” says Melissa. “Turkeys are great for production, but they also provide a lot of fertility and pest control. For example, all of the fertility for our asparagus comes from the turkeys. Our animals replace a manure spreader.” Melissa and Garrett rely on draft horses instead of tractors to maximize the land’s energy and decrease their fossil fuel consumption. “Biological systems appeal to us over mechanical systems,” Melissa explains. They borrow a tractor a couple of times a year to move loose materials like compost and mulch. 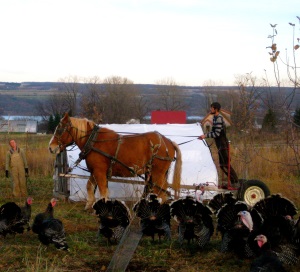 Young farmer-friendly programs have been central to their success. Melissa and Garrett financed half of the farm with a USDA Beginning Farmer loan, which prioritizes women and young people. They have also secured several loans and grants from the Natural Resources Conservation Service. “We’ve been really well-served by these agencies,” says Melissa. “You have to actively take advantage of what they offer, and we like our agents. They put in the effort to understand the farm and to give us the benefit of the doubt.”

Whenever they hit a roadblock, Melissa and Garrett turn to their fellow farmers for expertise and advice. “For everything we’re doing, there’s someone in the area who can answer our questions. We’re really lucky.”