“As much as you transform the land by farming, farming transforms you.”

Indeed, Kristin Kimball is transformed in more dimensions than one when she takes on the challenges of becoming a new farmer.  Author of The Dirty Life, Kimball succeeds in honestly sharing the raw struggles and victories she encounters when she abandons her life as a high-octane freelance writer in New York City in order to start the sustainable and organic Essex Farm with her husband.

From the moment she first stepped onto an organic farm in Pennsylvania as a journalist writing an article on organic farming, she felt the inklings of change. It was there that she met her future husband, Mark, who shaped her life into something she never anticipated. Kimball drove for six hours from Manhattan, expecting to interview Mark for her story, but instead she got swept up into the whirlwind of farm work- harvesting vegetables and slaughtering a pig. The first encounter between the two turned out to be representative of the rest of their life together. In this scenario, and in many more to come, Kimball quickly adapted to accommodate the world she was immersed in, regardless of how large the gap between her expectations and reality.

Making the leap was no easy feat and she plainly shares her doubts in her memoir. She worried, “if we did fail, I had no plan B. It was not like I could just walk back into my old life. I no longer had an apartment, for one, and I wouldn’t have the money for a deposit, since we were spending everything we had on things like cow.” Yet, she forged ahead despite her reservations, encouraged by Mark’s optimism, and strengthened by her resolve to work towards something more deeply gratifying.

Kimball also shares her enthusiasm as a beginning farmer, including her discovery of seed catalogs: “If it had been left up to me, we would have grown one of everything from the catalogs that year…How could you not order one packet each of saltwort, sneezewort, motherwort, and Saint-John’s wort. At a buck a pop, how could you go wrong?” Again, and luckily, her zeal was checked and mediated by her guide and partner, Mark. 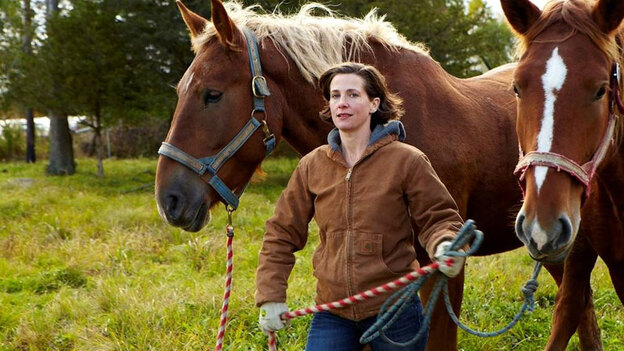 Kimball also posits her observations on the nature of the farming community, which turns out to be far from solitary. Among the many times she has worked with her farming colleagues include borrowing a tractor for field work when her draft horse gets injured, working with her neighbors to bale hay for storage, and enlisting the help of both friends and strangers, young and old, to harvest a near impossible number of potatoes for just two sets of hands. It’s not long before she comes to realize that “despite their reputation for independence, farmers are by necessity interconnected, exchanging among themselves labor, machinery, expertise, commodities, and information.”

One of the most essential parts of the book is her dissection of the unrelenting challenges, from the initial search for the perfect land, to a rat infestation in the house and barn, to planning her wedding while simultaneously attending to all the farm tasks at the height of the season.

“[Her] day started at 3:45 AM, chores before dawn, out in the fields with the horses by the time the sun was fully up, then work, work, work, racing the weather, the weeds, the season. Evening milking started at 4:30 PM and cleanup and chores were over by 7:00, but the chickens would not roost until 9:00. Too few hours later, the whole thing began again.”

The labor on the farm is not glamorized, but Kimball still manages to present her deep satisfaction over every achievement, no matter how big or small. Consequently, she asserts, “You don’t reap what you sow. You reap what you sow, hill, cultivate, fertilize, harvest, and store.”

Now, Kimball, her husband, and their team have cultivated their Essex Farm to provide full CSA membership for the entire year, promoting a “whole diet” of not only vegetables on an unlimited basis, but also grains and flours, dairy products, eggs, and meats. They continue to abide by sustainable principles, using draft horses instead of tractors and the 222 members they feed seem to be satisfied with the result.

Anybody who spends one full day on a farm, toiling under the sun, wind, or rain, can testify that any fleeting romantic ideals of getting back to the land can quickly dissipate if not rooted in something deeper. Amidst the growing food revolution nowadays, media and literature are peppered with stories of mostly young adults, growing disillusioned with a corporate lifestyle and consequently discovering the rewards of working with the land.

Kimball recognizes this as a key impetus for many, including herself:

“It was grasping out of chaos, personal and general, at the cliff end of blithe youth, for something knowable. Move toward a place so small that everything could be known. If my world became a farm and a single, tiny town, I could chart and understand every person and his connections, every acre, each plant, each animal. I wanted to believe that such a circumscribed life could be sorted and organized.

The town is unknowable, marriage unknowable, the farm- just a single tablespoon of its soil- is a confounding mystery.”

But her message is not to dissuade those committed to farming; she instead strives to negotiate a balance by providing her personal account, essentially an education complete with the rewards and the obstacles consistent with the farming lifestyle.  Kimball is generous with her knowledge, and the book is abundantly informative and thorough in detailing the entirety of her first year. Her words are realistic and encouraging, not because she ultimately mastered everything in her charge as farmer, but rather because she learned how to take things in stride. Being successful on the farm is not about completing every task in perfection, but rather about being flexible in the face of impediments- something surely applicable to worlds apart from farming.