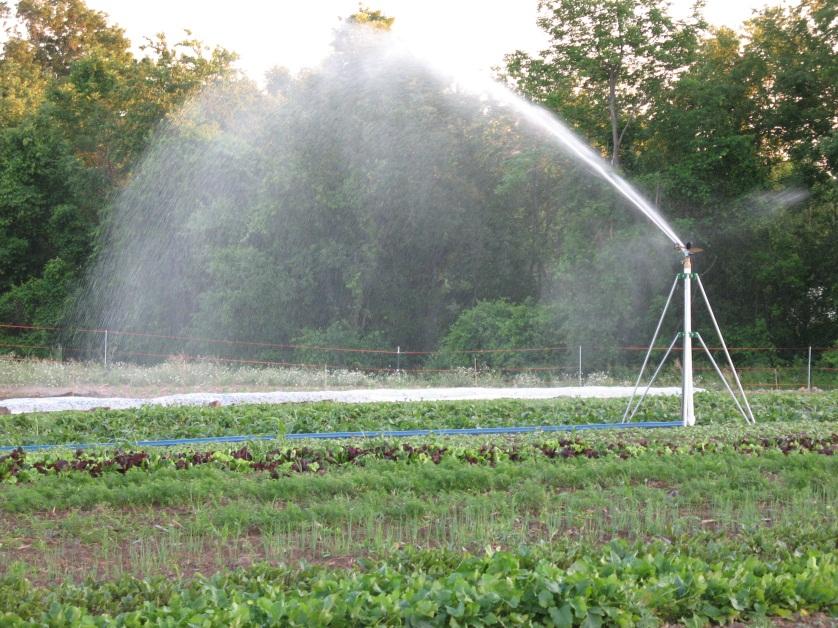 We planned to write more about farm finances, but were sidetracked by a lack of rain so bad that the corn fields around us are curling up to look more like grass than corn. The weird thing is in our area, if you weren’t trying to grow anything, you probably didn’t notice the dryness.  There were days where it almost rained (and seemed like it rained just one town over), days where it threatened rain, and days where it pretended to rain (with just a mist that got the surface of everything wet).

But for the month of June, we recorded under ¾ of an inch at the farm… total.  In general, we want our crops to receive more like an inch a week.  Thanks to our irrigation system and soils that hold at least a bit of water, things were okay until the last few days, but with still no rain in the forecast, we are starting to think about hard choices.  Our 1.3 acre pond ranges from 1 to 7 feet deep and relies on a spring and wetland recharge, but both of those sources are drying up.  It’s dropped about 3” and we are comfortable with dropping it about 2 feet.  (We are doing some research to figure out if we can go lower than that without damaging the nice ecosystem around it.)  Until now, we provided enough water to keep everything alive and growing okay (but not great).  Over the last few days, however, some things are starting to show a bit more water stress than we like.

Lack of rain also cuts severely into our working efficiency.  We spend about ¼ of our daily time on watering, with much of it early in the morning or later in the evening.

The only good thing about the dryness is that it makes us feel justified in prioritizing the purchase of a rudimentary irrigation system and a plastic mulch layer–the two infrastructure investments we came closest to cutting out because of cost, and the two things that have kept us in business this last month! 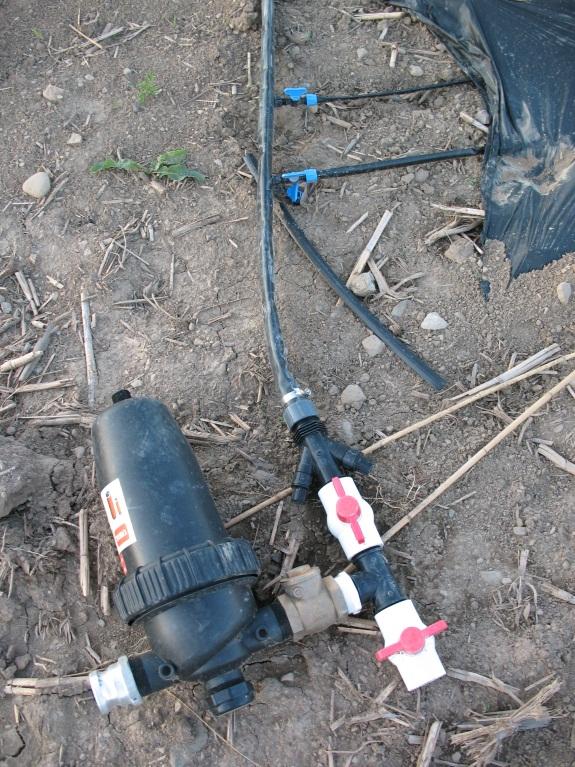 Our pump is a 2” Honda trash pump and we get the water to the fields through 2” blue layflat hoses.  We have 2 acres on 2 zones of drip (with a filter and pressure reducer before these sections to protect the emitters from clogging as much), and the remaining 2 acres under 1 moveable sprinkler (the “moveable” part of this is what eats up all our time… it’s a pain).  The sprinkler is a Komet #163 (we got this after hearing good reviews about it from fellow farmers) that covers 100 to 150 ft diameter circles at a time, depending on the wind conditions.  We run it for an hour to 1.5 hours per move, and then add or subtract 60’ sections of layflat to move it further down the beds.

So what are we doing to cope?

Over the long term, we want to build up our soils, starting by boosting organic matter, to make them more drought resistant.  Unfortunately, that is a multi-year process that this initial year of dryness (which is hampering cover crop growth) is not helping along.  Over the short term, we had some basic preparations by having some infrastructure, which allows us to get at least some water to the crops and helps hold it close to them.  Some other steps we are taking include:
Using 30% shade covers over our starts to trap in moisture… this bumped up the germination and survival rate a lot in our flats.
Using the little bit of row cover we have over direct seeded crops in the fields, which also boosted field germination.
Watering overhead only at the most optimal times (sorry neighbors for the 10pm pump noises!) so that we don’t waste as much to evaporation.
Rearranging our fall plantings by water needs instead of our typical planting by family groups, so that we can get more things under drip.  The crops under drip are definitely happier.
Obsessively checking multiple weather forecasts in the hopes that rain will show up (not as productive as the rest of the steps).

At some point if we hit worst case scenario (like no rain in July), we are thinking of dropping down to water just half of each section (so we will have half of each crop getting water).  Beyond that, who knows… but hopefully we won’t find out!