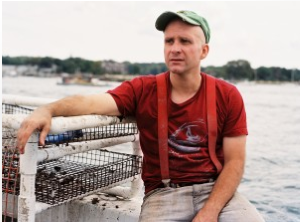 I am commercial fisherman transformed into an organic ocean farmer; and I’ve fallen in love with growing food at sea.

I started Thimble Island Oyster Co. in 2005 with a not-so-seaworthy 22 foot boat and 20 acres of leased ocean grounds nestled in the Thimble Islands of Long Island Sound. Over the last six years my farm has grown to 60 acres, and is now growing 200,000 oysters a year for seafood restaurants and farmer’s markets in Connecticut and New York.

I’ve been working the sea on-and-off my whole life. At 15 years old I quit high school to work the lobster boats out of Lynn, MA; later I fished cod and crab boats on the Bering Sea. As over-fishing decimated the cod stocks, I headed back to my birthplace of Newfoundland to try my hand as a fish farmer growing halibut and salmon.

But all the while as I worked these jobs, I witnessed first-hand how our oceans are imperiled from the twin threats of commercial fishing and climate change. I came to realize that I needed to change my relationship with the sea. So after some late nights reading up on how to “green the seas”, I decided to become an oysterman.

The reason oysters are such wonderful little critters is that study after study show that shellfish farms — as opposed to industrial fishing and fish farming — significantly improve water quality and have a net-positive impact on our oceans. Oysters are considered a “keystone” species by conservation biologists because of the critical role they play in maintaining the structure of an ecological community. According to Mike Beck, lead marine scientist with The Nature Conservancy. “Shellfish farms represent one of most — if not the most — sustainable forms of aquaculture and fish production.”

So now I see myself as a new breed of “green fishermen,” who have shifted from hunter-gatherers trolling the seas in search of declining fi sh stocks, to ocean-based farmers sustainably growing shellfish on small plots of ocean acreage for local markets. Oysters rank as one of the top “super green seafoods” by the Environmental Defense Fund, and with over 90% of the world’s oyster reefs destroyed, oyster farming is now considered vital to saving our oceans and our food systems. Our favorite mullusk has even engendered a new branch of urban planning and design called “oyster-tecture”, which seeks to use oysters reefs to revive New York’s rivers and protect New York City’s coastline from the sea level rise expected with climate change.

As an eager member of the emerging green economy, I keep trying — and often failing — to do my small part to “green” food production. I use only recycled cages and other growout gear; designed a mobile DIY solar refrigeration system for transporting and storing oysters; harvest starfish and Asian shore crabs for “invasive species cooks”; and avoid the damaging impacts of dragging along the ocean floor by growing in deep water cages that function as artificial reefs for striped bass, blackfish and other species native to Long Island Sound.

At the same time there have been lots of challenges trying to set up and make a living off the farm. Like many other young farmers I can’t get access to affordable health care — critical because I’m an epileptic — and am saddled with crippling school debts.  And my liability insurance, which needs to cover my boat, my truck and my “livestock”, remains sky high. As all the other farmers out there know, keeping overhead low on farm is vital to keeping the barn doors open.

One of my biggest challenges has been convincing federal and state officials that I should be eligible for USDA and farm other programs. I am taxed as a “farmer” and I regulated by the Dept. of Agriculture, but all of the USDA programs are structured around “land-based” farming.  I’ve spent endless hours with government officials trying to figure out how to qualify for a REAP grant to build solar refrigeration units when my farm has GPS coordinates rather than a zip code. Same with the EQIP program. I worked with the USDA to become the first sea worker in CT to get an EQIP loan to reduce my engine emissions but it all fell apart because they have never worked with an ocean farm before.

So what are some the things we need to keep young farmers producing sustainable food for local communities? All of us farmers need affordable health care. We need loan forgiveness for college debt.  We need grants to tap into solar and wind power generation. In other words, if communities want our food, we need their help.

I am so excited to begin bridging the gap between land and ocean based sustainable farmers.  Let me know how I can help!