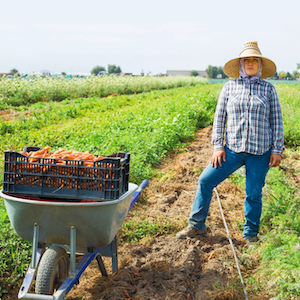 I was born in Mexico City and grew up in a neighborhood where violence and danger greeted me as a youth. Looking for another way, I emigrated to the US at 14 years of age and began working in California’s industrial agriculture fields harvesting celery, broccoli, lettuce, and strawberries. A decade later I arrived at The Abundant Table where I began to experience more profound ways of cultivating and respecting the land, and where I learned to tend plants throughout their entire life cycle, from seed to harvest, and how to tend to up to 20 different crops each season. Today I have 4 daughters who visit the farm and also relate to Mother Earth with dignity, and my husband and I tend to 1/2 acre where 180 chickens live that are part of the care that we implement in our fields, helping us rotate, rest, and fertilize the lands and including within the farm the life of chickens themselves. We recently transformed The Abundant Table into a workers’ collective, and the team has named me Interim Executive Director where I serve as the spokesperson for the collective voice of all of our farm’s workers. With the Young Farmers Grant Program, I’ll have the opportunity to receive training in administrative work in our effort to dissolve the stark divide between office and field that challenges many farms by allowing me to take one day off from fieldwork each week to further broaden my learning of farming to include the administrative work that many farmworkers don’t get a chance to learn.