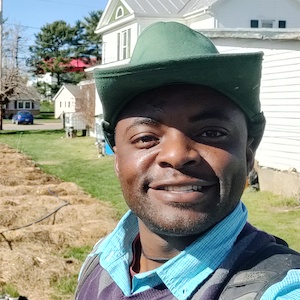 Greetings ladies and gentlemen! My name is Leons Kabongo, and it is an honor and the privilege to serve as the South-East Regional policy Representative at the National Young Farmers Coalition. As we embark on this journey, I wanted to share my story.

I was born in 1989 in the Democratic Republic of the Congo and the capital, Kinshasa, in a time when Zaïre (as it was known then) started cutting ties with Belgium, causing increasing deterioration of our economy. My childhood was spent in Goma, a small town in the eastern part of the country in the region of North Kivu. I was forced to mature before my time due to the traumatic experiences that I endured in the Democratic Republic of Congo before reaching 15 years of age. After the Rwandan genocide in 1994, the region of North Kivu especially the town of Goma, welcomed all the Hutu refugees who ran away and sought asylum in the Congo in search for safety and a better lifestyle. In May of 1997, my older brother and I experienced the rebel taking over the capital of Kinshasa where Mobutu was forced to Exile in Morocco. Laurent Désiré Kabila became president and that is when our name change from Zaire to the Democratic Republic of Congo. Forward to 2002, the most dramatic volcanic eruption of the Nyiragongo volcano in Goma happened, and my mother and brothers were all present. So, two years later in 2004 we left the town of Goma to join our father here in America. I graduated from Garfield High School in Prince William county in northern Virginia in 2008. In 2013, I received a Bachelor of Science in Economics with a minor in business management from Shepherd University. I speak five languages. Earning my bachelor in those fields was especially difficult with my language barrier, and required devotion that I can’t put into words. In 2016, after farming for a year and learning the conventional methods of agriculture, I graduated from West Virginia University, Davis college of agriculture and natural resources and design with a focus in Community Development, and took a job at Our Community Place a few years after, applying my knowledge of agriculture, farming, community and non-profit work with me.

I look forward to the plans God has for me, as I apply all the experiences that molded me and shaped me into the person worthy of serving as the South-East Regional policy representative.