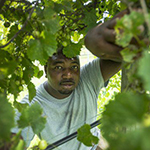 People Roles: Board of Directors

Davon grew up in Pittsburgh Pa, after high school he attended the University of North Carolina at Pembroke where he graduated with a B.S. Biology with concentration in Botany. While in college Davon enlisted in the Army Reserve where he served a tour of duty in Iraq and Afghanistan where he earned a purple heart after he was wounded by an IED (improvised explosive device). Now he owns and operates O.T.L. FARMS where he grows muscadine grapes and heritage breed livestock.