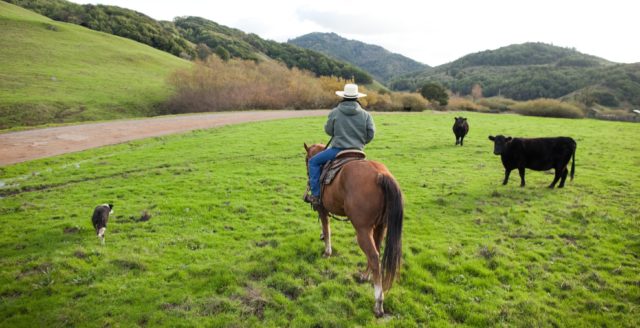 Bill Barboni II has led his family’s 100-year-old ranching business for 20 years. Located in Marin County, approximately 25 miles north of San Francisco, his ranch raises sheep and grass-fed, organic cattle. In December 2012, Bill’s family closed on the sale of agricultural conservation easements covering 1,200 acres on two properties to the Marin Agricultural Land Trust (MALT). These easements differ from traditional conservation easements in the sense that they require continued agricultural production on the land.

Bill has five siblings, but he is the only one engaged in agricultural production. His mother and father are 88 and 92. The family has sold agricultural conservation easements in order to distribute some of the equity in their property to address the financial needs and goals of family members. Selling the easement removed pressure to sell some of their land. If sold on the market, it would have most likely gone to an estate buyer.

The easement value on the 746-acre Barboni home ranch appraised at $3,000 per acre, or just over $2.23 million. Ten percent, or $300 per acre is attributed to the Mandatory Agricultural Provisions according to Jeff Stump, Easement Program Director for MALT. This means that the family realized approximately $225,000 of additional income on the sale of the easement as a result of providing MALT the authority to ensure the land stays in production in perpetuity.

MALT considers the contribution that every productive farm or ranch adds to the viability of the larger agricultural community. After the group’s 20th anniversary, MALT’s leadership began to look at ways to improve their impact by developing new easement language. They wanted a revised tool that would be used for all future projects. In 2011 the board approved affirmative agricultural production language referred to as the “Mandatory Agricultural Provision.” The language has been used on all MALT easements since and requires that the landowner actively farm or ranch according to an Agricultural Management Plan approved by MALT and revised at least every 10 years. If the landowner can no longer follow the plan for any reason, i.e. disability or retirement, they can lease it to another farmer or rancher. If they fail to adequately follow the plan, or lease it to someone else, MALT has the legal authority to step in and select a qualified person to farm the property.

Barboni describes the affirmative production requirements as “straightforward”. He explains that for his family and others who sell easements so they can stay in agriculture, “the mandatory ag provisions are a no brainer…this is what we do.” Stump concurs that no landowner has “so much as blinked an eye.” Additionally, “mandatory production language is very valuable for young farmers as it lowers purchase price, and, more importantly, helps someone justify the sale to an agricultural buyer.”

MALT is the nation’s oldest strictly agricultural land trust and has protected over 45,000 acres in Marin County since it’s inception in 1980. Marin County has a history of strong local land-use protection policies. As a result, the threat to agricultural properties is not from residential development. The threat to ranchland, according to Barboni, is instead from wealthy estate buyers for whom “the agricultural income is insignificant—people who would take the land out of production.”