We at the National Young Farmers Coalition are stricken by the persistent violence against black people, including the recent killings of Alton Sterling, Philando Castile, Delrawn Small and Paul O’Neal, among too many others. Like many of you, we’ve processed shock, anger, fear, grief—and felt called to respond to a deeper questioning: What is our role as a young farmer advocacy organization with predominantly white leadership in showing up for racial justice? What does this time ask of us?

We begin with the simple and necessary affirmation that Black Lives Matter. We know that systemic racism encumbers people of color in almost every aspect of life—from physical violence to the wealth gap to disproportionate incarceration to housing discrimination. We recognize the destructiveness of food apartheid, and that access to healthy, fresh food and inclusion in the “good food movement” are not equal across racial difference.  We also acknowledge that systemic racism divides us all with fear and guilt, undercuts our personal relationships, and keeps us all and our movement from reaching full potential. And we affirm that the agricultural community must show up to be a part of solving these challenges.

The contributions to agriculture made by people of color in the United States are immense.  At its founding, this country’s wealth was built on the agricultural labor of black slaves. Latinos, Latino immigrants, and other foreign-born farmworkers of color currently undergird the U.S. food system and produce the majority of the food we eat.  More than 60% of the world’s food supply comes from crops originally cultivated by Native American farmers. Chicano farmers have led the charge for farm worker rights and continue to be leaders in grassroots farmer organizing.  African American farmers modeled today’s intensive and profitable small farms fifty years ago, and pioneered farmer cooperatives and community land trusts.  And Hmong American farmers are now at the forefront of popularizing local food in the Midwest.   However, these vital contributions to agriculture by people of color go largely unacknowledged within the dominant narrative of farming in this country.

The core mission of the National Young Farmers Coalition is to shift policies and remove structural barriers to make it possible for the next generation of farmers and ranchers to succeed. We focus on core issues such as land and capital, but we have failed to address race–an issue that may easily outrank any other for young farmers of color. When we tell the story of why our work matters, we frequently reference the devastating pace of small farm loss in this country, but rarely do we discuss the systematic dispossession of land from black farmers, and the lasting impacts of that stolen inheritance for their children and grandchildren. We don’t discuss the lack of mobility for the millions of Hispanic farmers who are now laboring for others, nor the original violence against Native Americans, who are now relegated to a fraction of what was once their land.

The National Young Farmers Coalition commits to giving voice to this shared history and being a partner for change. Thirty-eight percent of the U.S. population is made up of people of color, but only 7% of farmers are people of color. This is a problem. If we are to achieve a critical mass of farmers in this country, the nation needs more people of color to enter and succeed in agriculture. And if we don’t create more paths for their leadership and influence, we will never achieve a food system that is truly just. 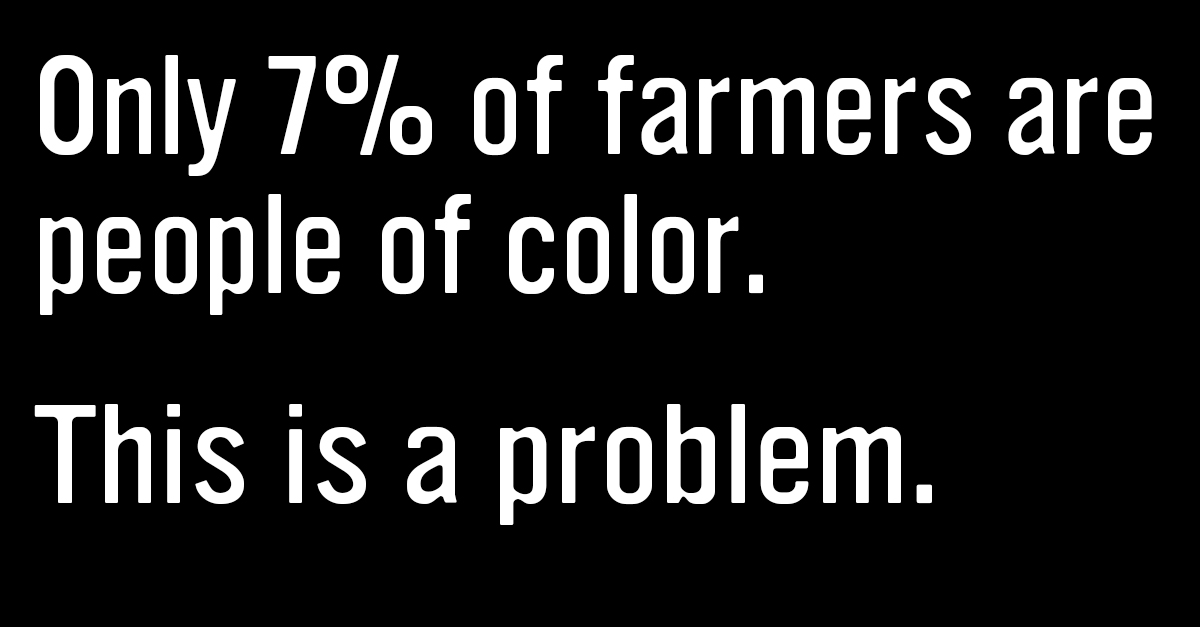 We envision our coalition as one made up of all members of the agricultural community, standing in solidarity and raising our voices together in support of the next generation of U.S. farmers. The National Young Farmers Coalition will include and advocate for farmers and ranchers of all races, ethnicities, and backgrounds; we will include and advocate for farmworkers, apprentices, and other farmers who don’t own land; and we will include older, experienced, and retiring farmers who are also major stakeholders in the future of farming.

The National Young Farmers Coalition commits to being part of this change, and to working to ensure that all young people have an opportunity to succeed in agriculture. As such, we will:

With these commitments, we will build a country where any young person can succeed in agriculture. We hope that you will stand with us.