The following testimony was given during the Department of Justice’s recent workshop on antitrust issues in agriculture in Washington, DC: 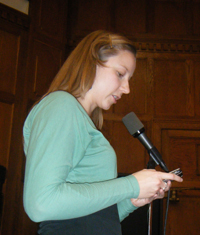 My name is Hannah Bernhardt, and I’m here on behalf of the National Young Farmers Coalition and the non-profit organization The Greenhorns, whose mission is to recruit, support, and promote young and beginning farmers in America.

Secretary Vilsack has stated a goal of recruiting 100,000 new farmers as the current population of farmers rapidly retires. We are working hard to help our country reach this goal, but young and beginning farmers face many barriers, including access to land and access to capital. In the current market place, young and beginning farmers can’t begin to compete with the large corporations who do have that access.

Additionally, I grew up on a farm in southern Minnesota, but I was never encouraged to pursue farming as career because all the farmers I knew were in agreement that farming is a terrible way to try to make a living. My dad took an off-farm job in the 80s to supplement our farm income, and statistically, in 2007, 90 percent of all farm household income in our country came from off-farm sources. My own parents and the families of other young farmers I know are reluctant to support our efforts to farm because they know how hard we will struggle to make a profit in this industry.

So if we’re to reach Secretary Vilsack’s goal of 100,000 new farmers in America, aspiring farmers need to feel confident they are entering a fair marketplace, and that they will be able to support themselves and their families when they pursue farming as a career.

Before I finish, I want to also take a moment to thank the many farmers in the room, who despite enduring years of frustration with the industry, and likely quickly approaching retirement, have not given up on advocating for the future of American agriculture. Your perseverance and patriotism inspires us, and the next generation of farmers thanks you for being here today.