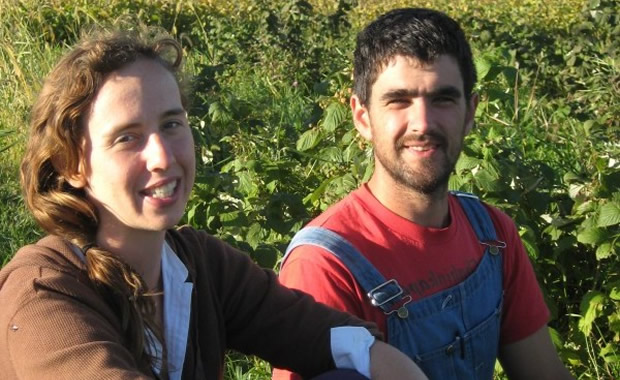 Sweet Beet Farm is a small, 10-member CSA run by the husband-and-wife team of Nick and Amelia Neaton in Watertown, Minnesota (located 30 minutes west of Minneapolis).  Nick and Amelia are in their first year as a full-fledged farm operation and despite no advertising budget and no fancy website, they’ve still managed to get the MN governor’s family as a CSA subscriber along with juggling off-farm jobs and investing their hearts and minds in the growing sustainable agriculture movement in the Minneapolis/St. Paul area.

Before their recent foray into farming, Nick and Amelia were living in Minneapolis and working in their respective fields after college graduation: Amelia as a trained architect and Nick doing farm education at Gale Woods Farm in a Minneapolis suburb.  Amelia said that their lives were ok, but “we just didn’t feel like we belonged in the city….We really wanted to have a huge garden.”  Two years ago, Amelia tenaciously pursued and eventually was offered a beekeeping and apple grower job at Ames Farm in Watertown, MN.  “The stars aligned with the Ames Farm job”, says Amelia.  The position was an “in” to the local farming world as well as her and Nick’s opportunity to move out to rural Watertown, MN.  Shortly after moving for Amelia’s job, Nick delved further into agricultural education by taking up a position as the local 4-H coordinator, working with 24 different clubs and over 600 kids from their county.  On top of off-farm jobs and farming, they are also active in the local MN Sustainable Farming Association chapter, with Nick serving on the Board of Directors.

Initially, both Nick and Amelia didn’t foresee that they would start a farm business, but were more interested in growing their own food and being self-sufficient.  After a very successful gardening season at Nick’s parents in 2009, they began to think more seriously about expanding into a small vegetable CSA and realized that they still had a lot to learn.  They enrolled in the 2010 Land Stewardship Project’s Farm Beginnings program, a MN-based classroom and field training program for beginning farmers that emphasizes sustainable farming techniques, whole farm planning, enterprise planning and business planning. Nick was initially skeptical about enrolling in Farm Beginnings, “I thought ‘I grew up on a farm! I don’t need to go to classes!’  But I learned that farming is not just running a farm, it is running a business.”  Perhaps even more importantly though, Farm Beginnings gave Nick and Amelia the confidence and support to make their beginning farming dreams a reality.