Farmers who produce maple syrup depend on cycles of above-freezing days and freezing nights to keep tree sap flowing. These ideal conditions typically occur during late winter or early spring in New England and the Midwest, allowing tappers to collect sweet sap to boil down to maple syrup. But for farmers Katie Funk and Jeff Hake from Funks Grove in central Illinois – approximately 150 miles south of Chicago and in the southernmost point at which maple syrup production is possible – climate change is impacting these conditions.

As the weather gets warmer earlier in the year, Katie’s family, who has been farming and making maple syrup in central Illinois since 1824, has had to start tapping trees as early as January, a new and unprecedented phenomenon. The shifting climate may also be responsible for the new and increased pest and disease pressures they see impacting sugar maples–milder winter temperatures allow them to survive farther north than in the past. “We just never know if the next debilitating introduced pest or disease, such as the emerald ash borer or Dutch elm disease, will attack the sugar maples,” says Jeff. 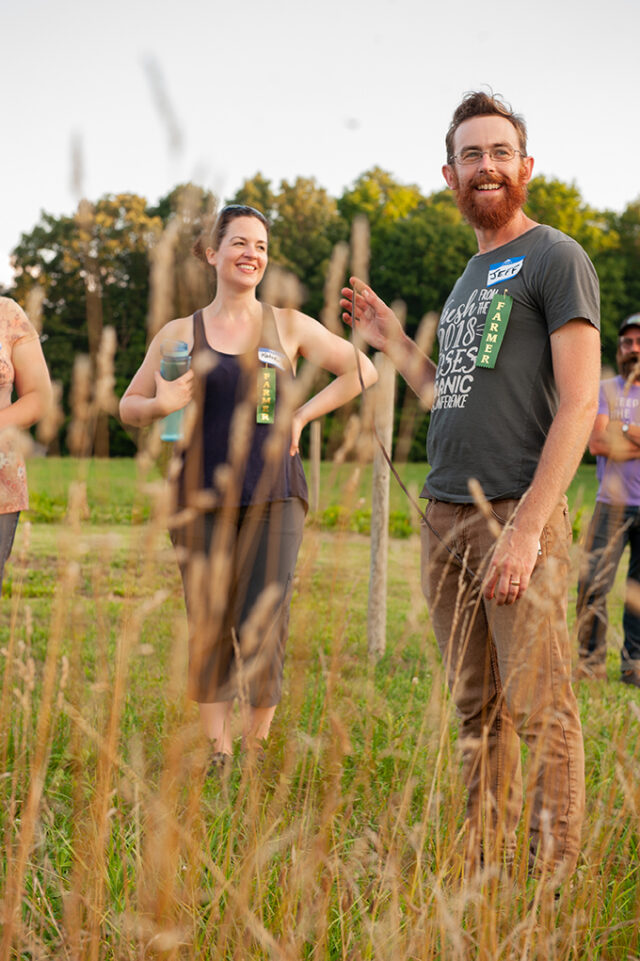 Katie’s family currently makes enough syrup to sell in their retail shop from March to August, but in anticipation of continued shifts in their maple production, they have invested in some infrastructure changes to their farm. Katie’s parents recently built a commercial kitchen to enable them to produce more value-added goods. If they produce less syrup due to climatic shifts, they will need to make more value-added products to compensate for that loss. They also upgraded their method for collecting sap, shifting from a bucket system to a tubing system. Unlike buckets that require significant human labor, tubing, which relies on gravity and a vacuum system for sap collection, can run 24/7 without relying on human labor. Buckets can also overflow with sap, but that is less possible with a tubing system. The tubing system is both more efficient and leads to less waste.

While Katie and Jeff assist in the maple syrup operation, their own venture is a new fruit and grains operation at Funks Grove, which they started in 2016 along with Katie’s brother, Jonathan. They grow the wheat, maize, and barley that they use in their baking mixes, and make fruit leather with maple sugar from the maple operation. Because the fruit and grain operation is so new, it’s difficult for them to gauge how climate change has impacted it. However, they note that they have to be very adaptive as the changing climate shifts planting and harvesting schedules, and makes it more challenging to predict yield.

Katie and Jeff haven’t yet participated in any state or federal programs that support farmers with employing sustainable or climate-friendly practices on their farm – they don’t know where to start. “It’s very overwhelming to even determine which program is the best for us,” says Katie. “It’s difficult to take the time to research all options out there and still run a farm.” Many of the application processes for these programs are also very extensive and time consuming.

Applying for these programs also doesn’t guarantee funding. Jeff and Katie have applied for a few but unfortunately their applications were denied. They are currently working on a grant for a local food processing hub, but applicants have to be well-established before they can even be considered. “You’d have to spend between $100-200K for a consultant on a feasibility study to even be able to apply – makes you want to say ‘we’re just going to do this ourselves,’” says Jeff. Katie and Jeff think that an advisor for these types of programs that could support young farmers with finding programs and applying to them would be very helpful.

Despite the challenges they’ve faced with accessing funding, Katie and Jeff have still managed to employ practices on their farm to mitigate the impacts of climate change. A grant they did receive, from the FruitGuys Community Fund in California, enabled them to plant pollinator plots near their grain field and orchard. They also had the opportunity to grow a wheat crop on 9 acres of a 100-acre field in Funks Grove that Katie’s family’s conventional row crop operation is transitioning to organic and diversified production to promote soil health.

Katie and Jeff are very committed to climate advocacy. Jeff says, “Our farm and our work in the local food system is a result of climate change itself. We’re doing this work directly because climate change is such a threat, and growing food like we do is our reaction to that. It is how we address the threat.” 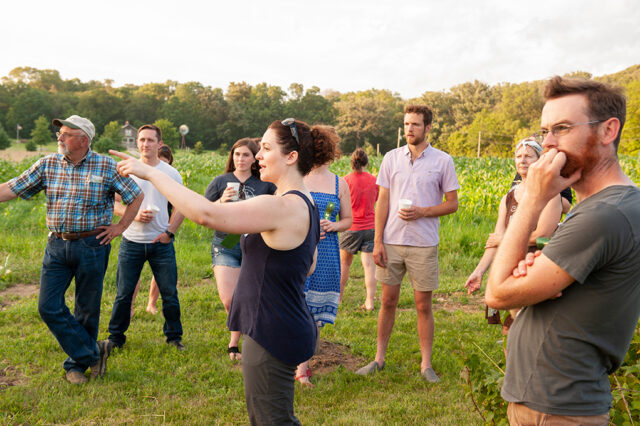 Jeff is the current president of the Central Illinois Young Farmers chapter, founded in 2019. Climate change is one of their top priorities as a chapter. In 2019, the Central Illinois chapter organized a soil health listening session in Georgetown, Illinois to discuss the impacts of climate on young farmers. That year, Rodney Davis visited Funks Grove after meeting Katie and Jeff at a roundtable farmer meet-and-greet at their local grocery co-op. They also invited members of the Illinois Stewardship Alliance (ISA), the Illinois Environmental Council, and local media to attend. “He’s not a climate activist and wasn’t at all on the same page, but we had the opportunity to tell him what was happening on our farm,” says Jeff. The ISA hosted another event at their farm, during which they gave a farm tour to guests to illustrate how they are addressing climate and conservation issues at Funks Grove. Last year Lieutenant Governor Juliana Stratton also visited their farm and was very sympathetic to the challenges they and other farmers are facing because of climate change.

Katie and Jeff emphasize the importance of farmers sharing their stories about the challenges they are experiencing because of climate change. Jeff says that because “the general public has a certain amount of respect for farmers, it could be more powerful for them to hear from people directly working with and affected by climate change versus from politicians or someone outside of that realm.” Jeff says that engaging in climate advocacy as a farmer “feels a little like a last stand. If we can’t farm here on some of the world’s best soil, if we lose the ability to do that, it doesn’t feel like there is much time left to get this right. All our community members are doing the most work to address it and will suffer the most if the cycle keeps spinning faster. There are not many more important things to do than speak out.”