“Climate change isn’t anything new for farmers who have been working here for the past ten years,” says Carolina Mueller, a farmer who supports her partner and farm owner, Lorig Hawkins, with running Middle Ground Farm, a 30-acre certified organic vegetable and livestock farm in Utley, Texas. 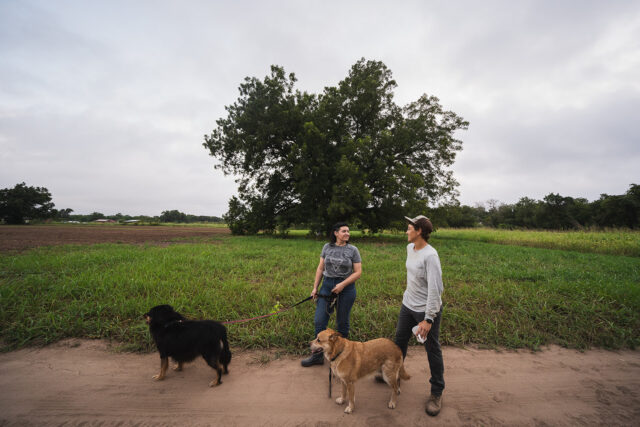 Carolina Mueller (left) and Lorig Hawkins (right) stand in front of the native pecan tree on the property,

estimated to be over 100 years old. In the background on the right, you can see sunflower cover crop.

In the aftermath of Winter Storm Uri in February, many farms in central Texas were left reeling from the impacts of this historic freeze which included having no electricity and, consequently, no access to water. Carolina and Lorig lost a large portion of their field crops and plant starts at Middle Ground Farm, setting them back more than a month for this season. Two hours away in Fredericksburg, farmers at Hat and Heart Farm were without power for over two weeks. During and after the storm, they had to fill buckets by hand to get water to their animals.

In central Texas there is always a chance of freezing temperatures in February; the freeze alone wasn’t what made this situation particularly devastating. “It was a complete and total infrastructure collapse,” says Carolina. “It was foreseeable and could have been anticipated. Our state government let us down.”

Unlike the rest of the contiguous United States, the power grid in Texas is not connected to an external grid, a consequence of primarily oil and gas lobbying efforts, and the electrical system isn’t weatherized for very low temperatures. These two factors played a major role in the disaster during and after the winter storm: oil and gas lines froze, as did wind turbines; a nuclear power plant shut down; and because of its isolated grid, Texas was unable to draw electricity from neighboring states. Rather than take responsibility for the mismanagement of the state’s power grid, officials in the Texas state government, including the Texas Agriculture Commissioner, instead opted to scapegoat renewable energy as the problem by spreading false narratives about how wind turbines were responsible for the power grid failures even though they account for only up to 20% of the state’s total power grid. 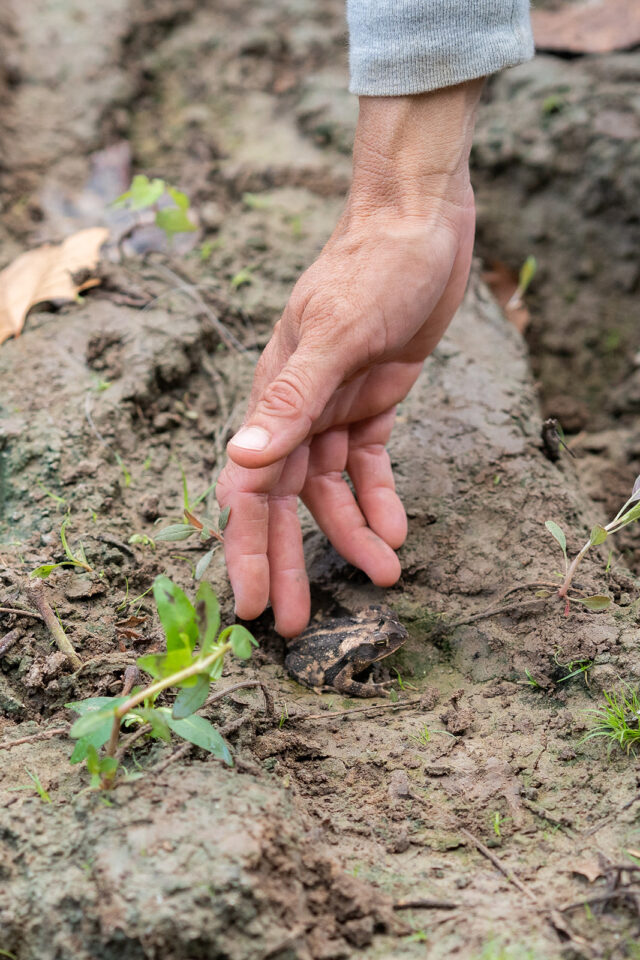 Being on the Colorado River, Middle Ground Farm is home to many different animals,
including rattlesnakes, egrets, armadillos, and frogs.

In Texas, disaster relief is a crowdfunded effort versus the state having an established fund for emergencies, leaving many without financial support from the state to turn to. As a result, Carolina says, “People have been left on their own to rebuild and recover.” After Winter Storm Uri, the Central Texas Young Farmers Coalition partnered with 7 organizations around the state to launch a crowdfunding campaign and raised over $200,000 for farmers in the area who lost power, water, and infrastructure in the historic ice storm. In the first round of relief, $121,000 were distributed to 112 farmers all over Texas. A second round will open soon and a portion of the funds will be set aside for future storms.

The winter storm has ended, but Carolina believes that “this is just a taste of the extreme weather events we can expect moving forward.” The impacts of climate change on farmers in central Texas stretches far beyond Winter Storm Uri and Hurricane Harvey in 2017 that brought over 60 inches of rain in four days to the Houston area. Carolina and Lorig have noticed an overall increase in humidity, heat, disrupted rain patterns, and drought over the past ten years. These climatic changes make farming more challenging: humidity means certain crops are more vulnerable to mildew, mold, and disease; heat can cause vegetables to fail or bolt; and drought can spell disaster for both vegetable and livestock production.

At Middle Ground Farm, Carolina and Lorig have worked hard to rehabilitate soil that was fallow for many years and to implement rotational grazing with their cattle, which has already helped build healthier soil including the return of native grasses. They also practice cover cropping and are very careful about their organic pesticides application as they are located right next to a river. After not having access to water during and after the winter storm, they want to invest in a new well that isn’t dependent on the power grid should a similar disaster happen in the future. 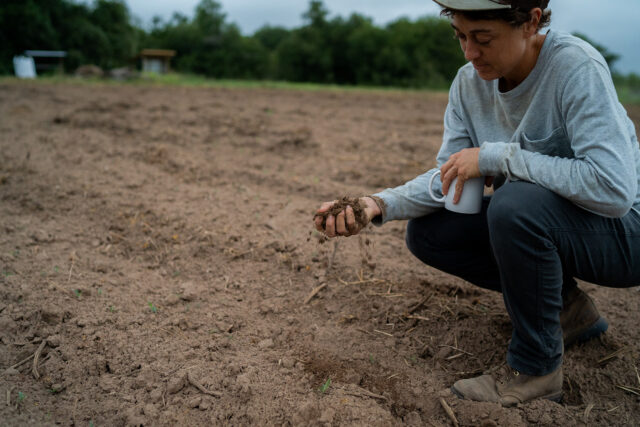 The landscape young farmers have to navigate in Texas comes with many barriers. Those looking for land are competing with investor-backed developers building homes to accommodate the large influx of people moving to central Texas. Extension agencies in Texas generally aren’t set up to support young farmers interested in diversified vegetable production or rotational grazing. The Natural Resources Conservation Service (NRCS), an agency of the USDA, does offer programs like the Environmental Quality Incentives Program (EQIP) that provides financial and technical support to agricultural producers to address natural resource and environmental concerns, but this assistance often still necessitates large upfront capital investments. Through EQIP, a farmer can get reimbursed for constructing a high tunnel, but they may still have to take out a loan to cover the hefty costs in the first place. Similarly, farmers could get reimbursed for cover crop seed, but if that cover crop fails – increasingly likely as weather and rain patterns become less predictable – NRCS may not be able to reimburse that farmer for their investment.

Carolina feels that politicians and legislators in Texas need to not only acknowledge the existence of climate change, but work quickly to create programs and policies to mitigate it and support farmers dealing with its devastating impacts. Many lawmakers in Texas come from a more traditional cattle ranching background and don’t always represent the perspectives and needs of young farmers who work in diversified vegetable and livestock production. Therefore, advocacy is vital. Carolina and other members of the Central Texas Young Farmers Coalition are working to mitigate climate change by supporting soil health policy and fighting the rapid development of nearby Austin to keep farmland in farming. Carolina also believes that “we need more young farmers running for office here in Texas! We need to be represented by people who know what it means to be a beginning, small-scale farmer and we need a Texas Department of Agriculture that serves many different types of farmers.”

Carolina sees a changing farming culture where growers also see themselves as stewards of the land and climate. To support this change, she advocates for workers’ rights, improving political leadership and energy infrastructure across Texas, and improving farm education opportunities for young farmers. “Being a business owner is challenging, especially if you didn’t inherit land or infrastructure, but being a steward of the land and the environment is crucial.” Carolina has seen one positive outcome as a result of COVID-19: more understanding from consumers and the general public about the importance of local farmers. 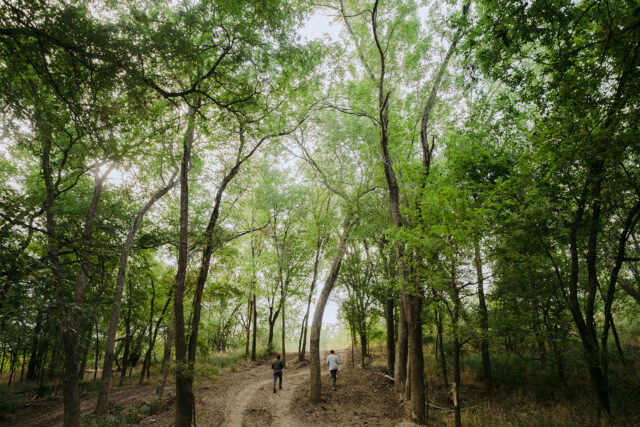 Lorig Hawkins and their crew walk through the lush wooded area on their back up from the river.