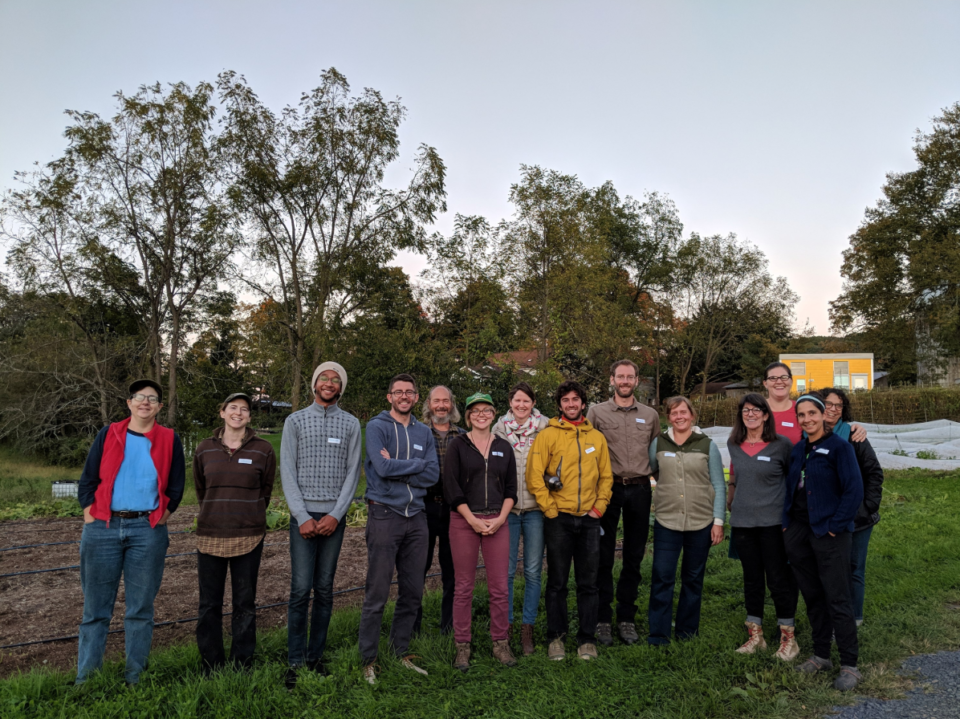 The National Young Farmers Coalition (Young Farmers) is fortunate to have chapters in five regions across New York State. Each chapter is working to support their communities and to organize for a brighter farming future by tackling structural issues and improving existing resources. In 2018, with strong support from our chapters, we ran a successful campaign focused on land access, taking a significant step toward realizing our vision of establishing working farm easements as the standard best practice in farmland protection.

2019 Legislative Session
To help set our policy agenda for the 2019 legislative session in Albany, we engaged our chapters through a series of listening sessions as well as a statewide policy survey. The feedback we received helped us focus the bulk of our advocacy efforts on two existing New York State young farmer programs that have been working well for some, but that are ripe for updates to help better serve eligible applicants.

Young farmers in New York and their peers across the country share the challenges of starting a career in farming while managing student loan debt and struggling to capitalize the on-farm investments needed to grow their operations. In New York, we are fortunate to have the Young Farmers Loan Forgiveness Incentive Program, and the New Farmers Grant Fund Program. Both have been successful in supporting young and beginning farmers in the state, but feedback from our network has clearly outlined some areas where these programs can be improved.

Our chapters also endorsed the Green Light Campaign which successfully passed legislation to expand access to driver’s licenses to all residents of New York State, regardless of citizenship status.

Please take BOTH actions to thank Senator Metzger, Assemblywoman Lupardo, and the co-sponsors of these bills for all their support!

As part of a larger coalition led by American Farmland Trust New York, we were also successful this session in lobbying Governor Cuomo and legislative leadership to recognize the important role of our State’s farmers in any legislative response to the climate crisis, and to make sure farmers have a seat at the table. The original version of the New York State Climate Leadership and Community Protection Act did not call for the creation of a specific advisory body related to agriculture. However, in response to our coalition’s efforts, the final bill, which was recently passed and is expected to be signed into law by the Governor, requires the State to establish an advisory panel on agriculture and forestry. As this historic legislation is implemented, we will continue to join our partners in highlighting the unique ways that agriculture can contribute to fighting climate change.

Over the coming months, we will continue this work and dive into planning advocacy actions in the 2020 legislative session.

More information on our bill to expand access to the New Farmers Grant Program (S.5716 / A.8007)
The New Farmers Grant Fund Program, administered by the Empire State Development Corporation, has been an important resource for many young farmers getting started in New York—funding a wide variety of projects from farm equipment to on-farm commercial kitchens. The program has directed $3.27 million in support of new farming operations since 2014. However, the current program framework excludes potential applicants who have limited access to capital and would benefit greatly from smaller awards. S.5716 / A.8007 would direct the Corporation to establish additional award tiers to allow projects of less than $15,000, and to fund projects worth $5,000 or less in an up-front payment.
Access to land is the number one barrier to entry facing the next generation of farmers in New York. In many areas—especially those closest to valuable consumer markets—farmers cannot compete with the high prices and pace of real estate sales markets. Leasing is often the only available option for many young farmers seeking to establish their operations. Construction or improvement of non-portable farm structures is not currently eligible for funding if the applicant is farming on leased land. S.5716 / A.8007 would address this issue while protecting the applicant’s stake in the investment if they choose to move their operation.
S.5716 / A.8007 would update the New Farmers Grant Fund Program to support smaller projects that will help young farmers to jump start their farming businesses, particularly for the many young farmers who are growing on leased land. The Act will also direct the Empire State Development Corporation to consider farm assets in addition to farm income when evaluating applications.

More information on our bill to improve student loan forgiveness for farmers (S.5715 / A.8101)
The New York State Young Farmers Loan Forgiveness Incentive Program, administered by the New York State Higher Education Services Corporation, provides much needed debt relief to qualified young farmers. However, many young farmers who are otherwise excellent candidates for State investment, do not current currently qualify. Under the current eligibility requirements, successful applicants must graduate from a New York university or college, decide to pursue a career in farming, and gain enough experience to operate a farm or a component of a farm—all within only two years after graduating. The result of this narrow requirement is that many experienced young farmers committed to farming in New York, are not currently able to benefit from this important program.

S.5715 / A.8101 would update the program by limiting eligibility based upon years of agricultural production rather than when an applicant graduated. Many young farmers are highly educated and do not come from farming families, and thus do not benefit from traditional pathways to a farming career. Student loan debt forgiveness is a valuable tool in helping young farmers to get started and grow a successful farming business. S.5715 / A.8101 would provide a timely and necessary update to help keep more experienced, highly educated young farmers farming in New York.