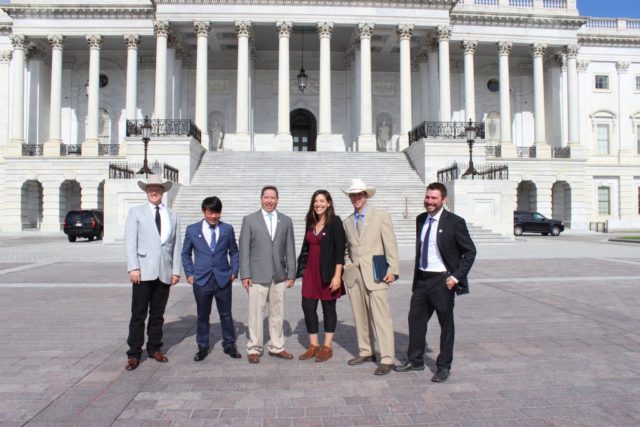 With the Southwest in exceptional drought, seven young farmers and ranchers from the Colorado River Basin made the trek to D.C. to tell Members of Congress and USDA about the importance of federal support for drought resilience and water conservation. Despite the pressures of the season, they left their farms and ranches to bring their stories to Washington.

The group touched down in D.C. on June 11 and, along with NYFC policy staff, met with over 20 Congressional offices and three USDA offices over the next day and a half. First on the agenda was to share their concern over the current and impending drought conditions in the Colorado River Basin. Michael Kotutwa Johnson, a Hopi farmer and PhD Candidate at the University of Arizona whose people have been raising crops in the semi-arid Southwest for over 2,000 years, flew out from Arizona. “What makes Hopi unique is we plant, tend and harvest our crops – beans, melons, corn, and squash – in an area that only receives 6-10 inches of annual precipitation,” Michael said. Another Arizona farmer, Selwyn Justice, operator, along with his dad, of a cow-calf operation and the oldest continuously cultivated citrus orchard in the state, warned his elected officials about the potential for water shortages in coming years with Arizona having the most junior water rights on the Colorado River.

Travis Stovall, a young rancher from Colorado, told his Senators about the ways he’s building resilience, not only on the ranch but in the way he accesses new markets and connects with his customers. In his meeting with Senator Gardner (R-CO), Travis found that “the most important takeaway was his acceptance and willingness to listen to new agriculture organizations rather than those traditional ones that are so familiar. Sen. Gardner lent his ear for me to express my concern on the future of local food and alternative markets.”

While the farmers were pounding the pavement, the Senate Agriculture Committee was sitting down to work through its draft farm bill (for more on the Senate Farm bill and its ‘wins’ for young farmers, see our previous post). The Senate draft offers far more support for young farmers than the hyper-partisan House version, but as our farmers made clear, the West needs more support to respond to drought. Dan Waldvogle of Colorado shared with Sen. Bennet (D-CO) that “it is extremely important that the 2018 Farm Bill have a hearty safety net and conservation programs directed toward creating resilience for the next generation of farmers and ranchers”. That same week, Sen. Bennet, responding to feedback from young farmers in his state, introduced an amendment during the Senate Committee debate to create a micro-EQIP program that would help small farms and ranches access the Environmental Quality Incentives Program (EQIP), USDA’s flagship conservation program.

On the House side of the Hill, Albuquerque farmer and Rio Grande Farmers Coalition board member, Tiana Baca, spoke with Congresswoman Lujan-Grisham about the importance of supporting farmers in conservation. Kong Thao, a farmer from California’s Central Valley, flew all the way across the country to meet with his representatives. As a small farmer cultivating 25 acres, he has a unique perspective to share. Congressman Costa’s office said that he may well be the farmer with the smallest acreage to come to DC. He highlighted some of the challenges farmers face when working on only a few acres. 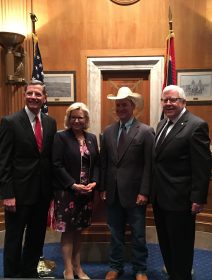 Along with their Congressional members, the group sat down with officials at USDA to share some of the challenges they face to accessing federal programs. They met with Mark Brusberg, the Chief Meteorologist, to discuss drought and improvements for data collection on tribal lands. They talked conservation and modernization of USDA programs with Leslie Deavers, the Chief of Staff for the Natural Resources Conservation Service and Jamie Clover Adams, Chief of Staff for the Under Secretary of Farm Production and Conservation. While meeting with Leslie Deavers, Ea’mon O’Toole of Wyoming highlighted the importance of land access for young farmers and the importance of support for land transition through conservation easements.

Communicating the needs of beginning farmers to USDA, building support for the microEQIP amendment, and supporting another amendment to increase conservation funding for beginning and socially disadvantaged farmers were major goals for the NYFC members who visited D.C. At the end of their second day, word came through that both amendments were included in the bill and passed through the Senate Agriculture Committee. “I would have never thought that by coming out here I would be able to make an impact,” said Kong. “But they [legislators and staff] all wanted to hear what a very small farmer, like me, does.”