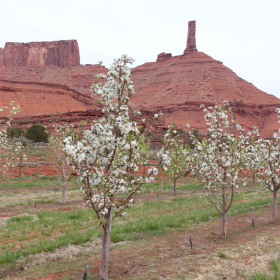 Wedged in between White House scandals and Beychella, the House Agriculture Committee released their draft of the 2018 Farm Bill.

As NYFC outlined in our initial analysis of the bill, there is some good news for young farmers. Programs that support the next generation, like the Beginning Farmer and Rancher Development Program (BFRDP), are reauthorized, and funding for the Agricultural Conservation Easement Program (ACEP), a critical tool for protecting farmland for future generations, is restored to $500 million.

As young farmers across the West attempt to build their on-farm resilience to climate change and drought ahead of another dry season, though, they’ll need more support than this bill would provide. Before the House Ag Committee amends the bill and votes on Wednesday, take a look at NYFC’s breakdown of how this bill will impact Western farmers and ranchers. And make sure your lawmakers know that you want a farm bill that works for the West by joining NYFC’s Team Farm Bill. Text “FARM” To 40649 or sign up here.

What’s in the Bill

Here’s the quick rundown of what’s in the bill, and what’s out. Keep reading below for NYFC’s full analysis on the House farm bill draft.

Let’s start with the conservation programs. Programs like the Environmental Quality Incentives Program (EQIP), the Conservation Stewardship Program (CSP), and the Regional Conservation Partnership Program (RCPP) provide incentives to farmers, ranchers, and landowners to invest in proven conservation practices, like water-efficient irrigation and cover cropping. The Colorado River Basin is currently designated as a Critical Conservation Areas under RCPP, bringing additional funds and partners to the table to address water quantity and quality in the region. The House farm bill would cut these programs by over $3 billion dollars, even after conservation programs saw significant reductions in the 2014 Farm Bill. With 11 Western states already experiencing severe drought conditions and with below average snowpack across the Colorado River Basin, farmers need access to these programs now more than ever to be resilient to increasingly dry and variable weather.

The most dramatic shift in this bill isn’t just about funding; it proposes to altogether eliminate the nation’s largest working lands conservation program, the Conservation Stewardship Program (CSP). The legislation includes an attempt to fold CSP-like provisions into EQIP, but the new program would be little more than a shell of its former self. Eliminating CSP as an independent program could disproportionately affect the West. CSP funds are distributed to states based on acres of eligible land, including ranch and rangeland – most of which lie in Western states. In fact, 8 of the top 10 states with the most acres in CSP lie west of the Mississippi. In addition, 13% of young farmers surveyed in NYFC’s 2017 national report utilize CSP. By eliminating the program and maintaining too few of its components, farmers across the country, and especially those in Western states with large rangelands, will have fewer funds available to conserve those acres.

Although NYFC will work hard to preserve CSP and overall conservation funding throughout the farm bill process, the draft House bill does have some good news for arid states: a new provision that expands USDA’s ability to support water conservation. Acequias and irrigation districts would be granted flexibility to work directly with USDA on watershed-level projects. Previously, these groups were ineligible to receive contracts through the EQIP program. This change would allow ranchers and farmers to partner with their irrigation districts and acequias to conserve water at the basin scale, magnifying the scale and impact of such projects.

The House also increases funding for the Organic Agriculture Research and Extension Initiative (OREI) by 50%, and adds soil health as an additional research priority for the program. The added priority would provide organic producers with more resources to use soil health to maintain farm viability during drought and variable weather. Despite these positive developments, the bill would also deal a simultaneous blow to organic producers and those aspiring to transition to organic by eliminating mandatory funding for the National Organic Certification Cost Share Program (NOCCSP). This program provides assistance to farmers to transition to organic certification. With nearly a quarter of all certified acres in the country falling within California and Colorado alone, Western farmers and ranchers rely on this program to help them access a new and expanding market.

Lastly, the House bill proposes to reauthorize the Beginning Farmer and Rancher Development Program (BFRDP) and provide level funding at $20 million per year. This program funds a slew of training, outreach, and technical assistance programs for young and beginning farmers, including those addressing water and climate. With renewed funding, BFRDP can continue to support Western young farmers. Last year, for instance, New Mexico State University was awarded a grant to increase climate literacy among young farmers and provide support for on-farm mitigation and adaptation strategies. It’s one of three projects funded last year that focus on helping young farmers adapt to dry and variable weather and climate conditions. Although NYFC will continue to advocate for increased permanent funding for BFRDP to meet demand, maintaining its existing funding is an important starting point as the farm bill process begins.

Across the country, access to land is reported as one of the biggest barriers to young farmers. In the 2017 National Young Farmer Survey conducted by NYFC, 16% of respondents from Western states reported land access as their top challenge to farming. The good news for land access: the Agricultural Conservation Easement Program (ACEP), which preserves land in agriculture for future generations of farmers, saw its funding restored in this bill, after it was cut in half in 2014. While funding was increased, a number of provisions are added to the program that cause concern. One new provision, for instance, would allow for oil and gas extraction from land conserved using federal funds through ACEP. While easements come in all shapes and sizes, and with many rights retained, publicly-funded easements are meant to ensure the maximum conservation benefit. The bill would also also fund projects that contain no farmland and remove the income cap that ensures federal funds only go to easement projects that need it. Wildlife habitat, soil health, water conservation, and water quality, as well as agricultural viability, should not be compromised when conserved with taxpayer dollars and those funds should be used as efficiently as possible.

In other good news, the House Ag Committee did provide a fix to the Conservation Reserve Program (CRP) that has been plaguing young farmers that rent ag land. CRP pays landowners an annual rate to remove environmentally sensitive land from agricultural production and plant it with species that will improve environmental health and quality. While the program does provide important environmental benefits, the CRP payments to landowners can compete with rental rates for young farmers, causing the unintended consequence of keeping new producers off otherwise accessible farmland. The House farm bill draft caps CRP rates at 80% of the average county rental rates, reducing its competition with young farmers. Additionally, the bill would reauthorize the Conservation Reserve Program – Transition Incentives Program (CRP-TIP), that transitions CRP land to new and beginning farmers.

In the coming days, NYFC’s Land Access Team will be digging into the bill and bringing more analysis on its impact on the #1 challenge facing young farmers.

Lastly, although hunger is typically outside NYFC’s wheelhouse, changes to the nutrition programs could impact Western states more than other regions. Programs that fund hunger relief have expanded work requirements in this bill that could disproportionately affect rural areas. These counties, also, often have higher unemployment, which further exacerbates challenges with these work requirements.

This bill will not be improved for Western young farmers and ranchers and key programs will not be saved without your input. If you want to be part of NYFC’s rapid response farm bill effort, it’s as simple as this: text “FARM” To 40649 or sign up here.