The fate of my crop—and my profit—often comes down to the state of my equipment. As harvest approaches, farmers are busy prepping all of their harvest equipment while they still have an opportunity to do so. During harvest we’re often working hard from before sunup to after sundown, leaving little time to work on broken machinery. Due to the time-sensitive nature of harvest, downtime resulting from equipment breakdowns can be disastrous.

Every grain crop has a moisture content range in which it can be successfully harvested. Grain that’s too moist makes the harvesting process difficult or impossible; grain that’s too dry is also problematic, and reduces both yield and quality. It’s critical to get the crop off of the field and transported to a buyer or a storage facility when it’s in that Goldilocks moisture range. It also needs to be harvested before any inclement weather arrives. Every time a grain crop that’s ready to harvest gets rained on, the grain quality goes down. Multiple wetting and drying cycles can have a devastating impact on quality. 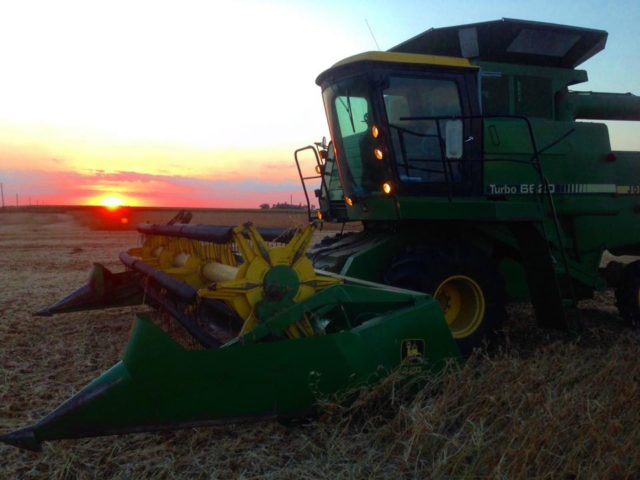 Once it’s harvested, the grain’s fate is dependent on the farmer’s marketing strategies. Due to the volatility of the market, many farmers “forward contract” a large portion of their crop in order to lock in a good or acceptable price. Then during harvest they transport the grain from the field to the buyer to fulfill the contract. If a farmer hasn’t locked in a price prior to harvest, and if the price during harvest is acceptable, they’ll transport the grain to a buyer and sell it on the spot. If the price during harvest is poor, they will often store the grain until the price improves.

Organic grain buyers are few and far between compared to conventional buyers. Organic farmers often have to sell their grain to a buyer much further away or in an entirely different state, which often necessitates storing it all on the farm in the meantime. The additional storage demands are an added challenge of being organic. I’m planning to significantly increase my own farm’s storage capacity within the next year, in anticipation of my organic certification in 2018.

I market my grain through a combination of forward contracting prior to harvest, spot selling during harvest, and occasionally storing some until prices improve. Since I’m currently transitioning to organic, I’m not yet able to sell my grain at certified organic premium prices. Instead, I sell the majority of my grain to the local town “elevator” at lower conventional prices.

Last year I was able to forward contract a portion of my wheat crop to an out-of-state buyer offering a small premium for transitional organic wheat. Overall, it was worth the extra work to store the wheat for several additional months and coordinate out-of-state transportation.

Going forward I would like to explore some specialty crops, including hemp and possibly some hops and malting grain for Minnesota’s growing craft brewing industry. These are all crops that are relatively new to Minnesota, with markets that are just beginning to develop and evolve. I think there’s a lot of opportunity there, and I find it exciting to be doing things that are new and unique.