The crops are thirsty. My farm is on the outer edge of the area affected by the severe drought in the Dakotas, and it’s been over a month without any significant rain. Standing in my fields, I’ve watched as rain fell just a few miles to the north or south, tantalizingly close yet so far away. Despite prudent planning, passion, and working from before sunup till after sundown, farmers are ultimately at the mercy of Mother Nature.

Ironically, rain was in abundance early this spring. So much so that I had to delay planting soybeans from late May to mid-June due to wet conditions, among other things. I did manage to plant one 60-acre field of wheat in early May, which benefited from the early rain. In the past, this particular field has been very problematic in terms of weed pressure. Unfortunately, several weeks after planting it became clear that the weeds would take over the field, and nothing could be done about it. I decided to terminate the wheat crop and replant the field with soybeans instead. This set me back a bit in added costs and a later planting date, which reduces yield, but it was a necessary evil. The ground was dry at the time, and it hasn’t rained since. As a result, germination has been poor, and it’s questionable as to whether or not that field will be successful. Then, of course—to add insult to injury—after I terminated the wheat and planted soybeans, the market price for wheat went up by about 60 percent. That’s farming for you.

I underseed my wheat with red clover, which helps to suppress weeds in less severe cases. After harvesting the wheat sometime in August, I allow the red clover cover crop to continue growing amongst the wheat stubble. The clover protects against soil erosion, fixes nitrogen from the atmosphere, attracts and provides for beneficial insects and pollinators, reduces soil compaction, conserves soil moisture, and increases biodiversity. I incorporate the red clover into the soil late in the fall or early in the spring to serve as a green manure, providing essential nutrients to subsequent crops. The incorporated clover adds precious organic matter to the soil, improving the soil structure. Improved soil structure allows the soil to take up and hold more water while also allowing excess water to drain more efficiently. Increasing organic matter also provides more nutrients to crops and beneficial soil microbes, while further reducing soil erosion.

Timing is critical when it comes to organic weed control. Weeds should be dealt with at their earliest stages of growth. The bigger they get, the harder they are to kill. The weather and crop growth stages largely dictate what can be done to control weeds and when. After taking action to eliminate weeds in a field, it’s only a matter of time before a new flush of weeds begins growing in the same field. The idea is to keep wiping out each consecutive weed flush until the crop is large enough to out-compete the weeds. This requires multiple pieces of cultivation equipment for use at different crop growth stages.

It’s easier to control weeds through cultivation in a row crop like soybeans or corn than it is when weed pressure is exceptionally high in wheat. Of course, if I weren’t growing organically I could just run out with a sprayer and spray some herbicide—problem solved. Organic farming is hard. 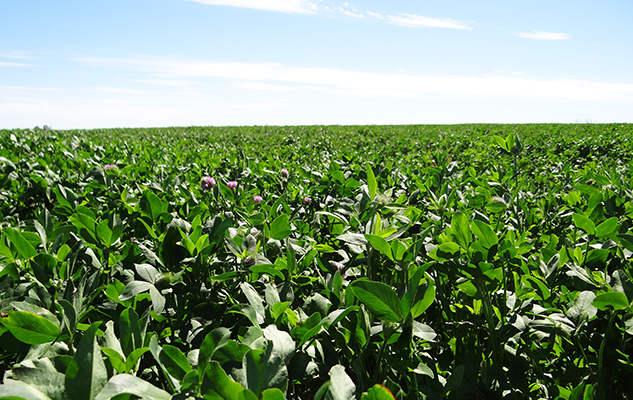 A few days after planting soybeans, I make my first shallow cultivation pass with a tined weeder before the crop has emerged. This tides me over until right after crop emergence, when a rotary hoe is the best option for cultivating the young soybean plants without burying or destroying them. I’ll typically use the tined weeder again for my third cultivation pass once the plants have grown larger. These early actions are methods of “blind cultivation,” affecting the entire surface without regard for the location of crop rows. This blind cultivation is mainly aimed at preventing weed growth within the rows of soybeans, as it’s nearly impossible to kill in-row weeds without severe crop damage once they are established. Weeds between the rows are much easier to deal with. When the soybeans get too big for tined weeding, I switch to a regular sweep cultivator that digs up weeds growing between the rows and hills dirt to bury and prevent weeds in the rows. After using the sweep cultivator a couple of times, the crop canopy usually develops enough to shade and out-compete future weeds on its own.

Organic farming is an ever-changing puzzle, dependent on countless variables. In order to succeed, a farmer needs to have a strong game plan and multiple backup plans, while also being endlessly adaptable. It’s incredibly difficult, but never boring.