I keep searching for ground to grow on. Literally. I drive up and down California looking for a place to plant my grain, hoping to someday find a long-term lease or even purchase land. This past February, two farmers in Sonoma County offered to let me farm their fallow land, one six-acre plot and one three-acre plot. While I was excited for the opportunity, I was limited by my seed supply.

The seeds I need aren’t readily available. I grow heritage wheat and barley—Sonora, Spanish Spelt, Ethiopian Blue Tinge Emmer, and Wit Wolkering. These varieties have done well for thousands of years in regions with conditions similar to where I farm, but they aren’t available through commercial seed companies.

Commercial seeds are grown in controlled conditions to ensure their production, quality, and viability. They’re cultivated in arid landscapes and managed with herbicides, pesticides, and irrigation. That doesn’t match how I farm. I dry farm on the California coast, and I don’t apply any chemicals. A seed carries the memory of its upbringing, so it needs to be matched with the conditions it adapted to. Since I can’t rely on seed companies, I purchase seeds from a network of nearby farmers who grow with similar practices. 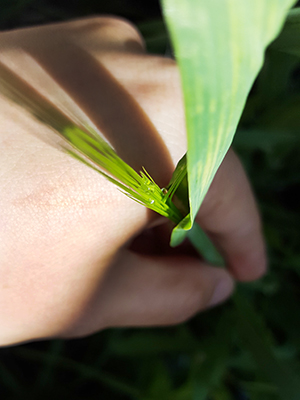 Farmers are matchmakers between land and seed. Each have their idiosyncrasies: land with its hot/cold temperament, weather systems, and dirt; seed with its hard exterior encasing a complex interior, rich with history. Sometimes there might not be a good match within the existing pool. There aren’t plenty of fish in the sea of heritage grain, so I started growing out and scaling up the varieties I need. To start, I requested a batch of seed from the USDA germplasm, and they gave me 25 seeds. I have one chance each year to grow them out.

Finding seed is only the first hurdle. It’s difficult to save pure seed stock because basic seed cleaning equipment doesn’t quite get it clean enough. The equipment separates seeds by size and shape, but sometimes unwanted weed seeds are the same size and shape. Another machine separates by density, and it costs $30,000. The most successful is the color sorter, which has an optic laser to identify color differences. Those machines are $300,000.

These costs are high for me and for many beginning farmers, but they’re essential for getting product to market. Seeing this common need, a few farmers and I began seeking and cooperatively acquiring equipment together. We scour Craigslist, inquire with equipment repair mechanics, and coordinate the transportation of equipment halfway across the country. So far, we still don’t have the right equipment to sort pure seed. I’m currently in search of a well-functioning, three- or four-screen air screen cleaner—let me know if you have one! 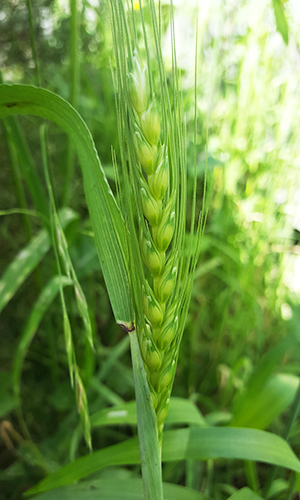 All this seed production takes time—years—and I need seed now. I hit up all my friends. “All I’ve got left is for seeding my field,” they said, understandably. I called friends outside California with different planting times and heard the same thing. It felt like begging for change to get fare for the last train!

I turned to someone who keeps some verified seed, and they said they’d get it to me, but their major reaction over a minor misunderstanding soured the deal. But what was my alternative? I looked at the UC Davis list and the Washington State list and found that most of their offerings were bred for regions unlike where I’m growing and were patented with limitations on seed saving and seed sales. I looked at longer lists from bigger companies, but all those were owned by Monsanto. I was stuck between doing business with a difficult person or with a megacorporation that is buying up the world’s genetics. I couldn’t believe I stood at this juncture, not just as a farmer, but as a member of the human race. How did we get to the point where our staple crops are in the hands of so few?

We know how, we know it’s a global problem, and we know we must undo the monopolization of life by re-democratizing seed. That requires collaboration, sharing, and reliance on each other. In that vein, I got back on the phone and called up friends and neighbors, asking for any bits that could be spared with the promise of returning seed to replenish their stock.

After much agonizing, driving between counties, and speed seed cleaning, I’m happy to say that all the fields are seeded, and this match-making season is closed.