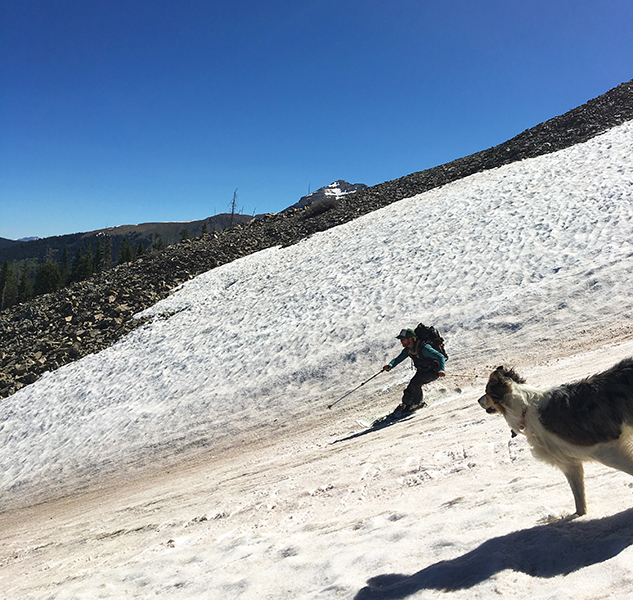 When I began thinking about this blog post, it made me want to check in at the source of our water. Three miles of highway and another 15 of variable dirt roads, and my brother and I were within striking distance of patches of snow clinging to windloaded north faces. A little ski boots-on-talus action and we were making some legit ski turns. The grins on our faces at the bottom of this thin patch of snow (it was mid-June after all) are the reason I first came to Southwest Colorado and a big part of why we chose to settle here.

One of my biggest stipulations when we were looking to purchase land was that we would not leave the mountains. I spent a disproportionate amount of my time skiing the mountains of the Western U.S., and there was no way I was going to sacrifice that way of life entirely for farming. Little did I know that my time on the slopes would give me a foundation of knowledge about watersheds that would serve me well as a farmer.

The sliver of snow where my brother and I “inspected future water availability” is situated in the La Plata Mountains, which are a microrange that drains water into the Animas, La Plata, Dolores, and Mancos Rivers. This is a tall order for a small set of peaks, but they are mighty, rising over 13,000 feet. Among the tallest (there is active debate about the highest peak in the range) is Mt. Hesperus, which is regarded by local native tribes as the Northern Holy Peak, with Mt. Blanca, Mt. Taylor, and the San Francisco Peaks rounding out the other three cardinal directions.

Every drop of rain, every snowflake or hailstone that falls on Hesperus eventually flows into the West Mancos River. Part of the water that is tied to our property comes from Jackson Lake (a reservoir), which fills off of the West Mancos River. When we realized this connection between Hesperus, our property, and the Mancos Valley in general, we were all the more sold on our place. Living close to the mountains has advantages, like being able to physically see the source of our water and look after it. It also has drawbacks for farming, such as long winters and deep snow. Theoretically, since we are close to the source we should be free of most contaminants that one would find further downstream, such as petroleum products, chemicals, and agricultural runoff, but there are still threats to water quality. This was witnessed last summer during the Gold King Mine spill into the Animas River, which is only thirty miles from Mancos. That kind of threat is a reality anywhere mining takes place, and Colorado was settled because of mining.

Another threat to agricultural water security in the West is development, as farms and ranches get bought up in order to strip their water for increasing domestic use. And then there’s drought, which is always knocking on the door. So even though I can go and check on my watershed and the water that will be flowing through my pipes later this summer, that water is not a certainty today or tomorrow, even though it is my “right.”

An old hermit once penned, “The idea of wilderness needs no defense, it only needs defenders.” This Edward Abbey quote certainly applies to our water rights and watersheds in the West. If we do not defend our water against the transgressions of development, mining, contamination, overuse, and misuse, incidents like the Gold King Mine spill will be repeated in one form or another.

These threats exist everywhere, not only in the West, and they deserve a lot more attention. Getting involved in the management of water in one way or another is a big step in the right direction. Whether it is being heard at a town hall meeting, getting involved in a conservation district, using efficient water management strategies, helping to clean and repair a ditch, or simply using less water, there are lots of small ways to have a positive impact that can add up quickly.

The Hopi, whose ancestors once settled the Mancos Valley, say “Paatuwaqatsi,” which translates to “Water is life.” Agriculturalists across the West know this all too well.