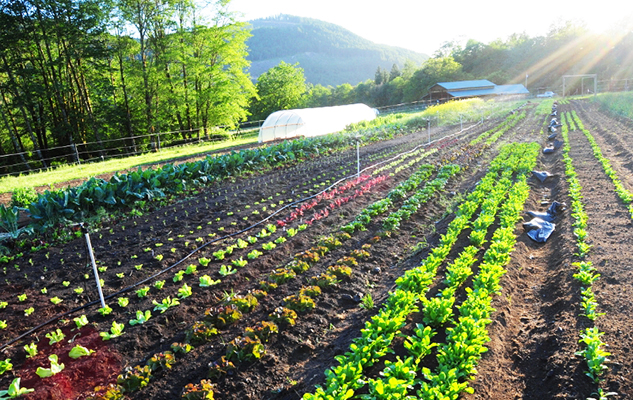 Being a farmer comes with ups and downs to the extreme. Every day we simply hope to wake up prepared for any and all situations and well rested enough to deal with what comes.

Sometimes, what comes is disaster. The story of one of the worst days on the farm this season comes from Brandon:

A few weeks ago we had an epic windstorm. Caitlin was away for the weekend, and I was all set for our Saturday market. I woke to an email on Saturday morning from our market manager: the market is rain or shine, but we will not set up if wind exceeds 40 mph. The weather report was looking iffy: 25-30 mph and steady rain throughout the day. Do I stay or do I go? Because we had harvested all of our vegetables the day before, completely unaware of the extreme weather forecast, I couldn’t just let our produce go to waste.

With an extra rain jacket in tow, I set out for the market. The weather seemed agreeable, so far. By the time I arrived, the rain had turned from a light drizzle to a consistent downpour. Just moments after our market tent was set up, the wind started to pick up. We had 25 lbs. of weight on each leg and a heavy-duty aluminum market canopy, so I wasn’t overly concerned.

Just as the next vendor arrived and began unfolding his canopy, a strong gust blew through the market, picked his canopy up, folded it in half, and blew it over the top of his truck, rendering it useless and destroyed. The next two vendors would not take the chance: they eschewed the use of their canopies, and sold produce directly out of their trucks. They kindly offered us all of their market weights, meaning I had 75 lbs. of weight on each canopy leg.

By noon, the weather was even worse. One other tent had blown in half, and multiple vendors had packed up and left. Completely soaked through to the bone and worried about the stability of the remaining market canopies, the last three vendors and I decided to call it quits. That was shortly after noon.

I arrived back at our farm around 3 p.m. From a distance, our wash station and our hoop house, the two structures I was most concerned about, appeared intact. As I got closer, I realized everything in our wash station had blown all over the farm—our waxed boxes, our harvest crates, our salad spinner, our tables, our buckets. I even found a few boxes, crates, and buckets down below our garden, in a pasture in the lower part of the farm.

Then, upon looking closer at the hoop house, I realized crisis mode was upon me: both of the ropes on our caterpillar-style hoop house had broken, with the plastic attached now only at the end walls, flailing along the length of the hoop house. First I called Caitlin—no answer. Then I called our nearest neighbor, Ben. Also no answer. I knew I had to act quickly: the wind was picking up, and with one more gust the plastic could be blown off completely, ruining our onions, which were curing inside.

I jerry-rigged a wire contraption to attach the ropes back to the ground posts. Then I sorted out the tangled rope and re-weaved the ropes over the top of the house, running back and forth, cinching down the plastic from end-to-end. At the end of the process, with the plastic re-secured, I felt a slight moment of relief. Then I looked over at our landlords’ garden. The plastic on their hoop house was only attached on one side, and most of it had blown over on top of their winter squash patch. They were out of town, so I knew I was still on my own. I pulled the plastic back, found a few snap clamps, and re-attached it to the frame. I thought my work might be done.

I was also in charge of caring for my landlord’s cattle while they were gone, so I decided to check on the stock tank and found the float valve had busted and water was gushing out. I attempted to detach the float valve from the y-valve and remove it, but instead I was repeatedly shocked by an electric wire I could neither see nor find. I had no idea where the shock or the pulse was coming from because I couldn’t see an electric wire anywhere.

By this time, the cursing had started, and it was echoing off our hillsides, reverberating throughout the valley. I finally detached the float. Problem solved. I still had no idea where the shock was coming from, but the stock tank was fixed.

My day was over, officially. I went home, took a shower, got in bed, and fell asleep.

One of our best days on the farm happened just a few weeks ago. Brandon and I were out chipping branches with our landlord Fred’s tractor when he ran over and told us one of his first-time heifers was calving and he needed our help. She was in labor, and the calf’s hoof was sticking out, but things weren’t progressing.

We herded her into the corral, where Fred investigated what was going on. He concluded everything was normal, the calf was just very large. After attaching chains to the two front hooves, he handed them over to us and instructed us to pull.

After several excruciating minutes, the baby calf slipped out and plopped onto the barn floor. He was alive and started to breathe on his own! We rubbed him down and got Mama up—she immediately began grunting and licking him, and he responded. We turned off the lights and left the two to bond.

It was an incredible experience to witness, and just another part of life on a farm. Farming is truly the best and the hardest work I’ve ever done.