University of Maryland agriculture instructor Meredith Epstein loves teaching, but it isn’t the career she imagined for herself. Epstein doesn’t lack the skills, training, or talent for her chosen profession—farming—she simply can’t afford to invest in a farm of her own because she has student loan debt. The Young Farmer Success Act of 2015 would remove this barrier to business investment for Epstein and thousands of other young farmers like her.

The Young Farmer Success Act (House Bill 2590) was introduced on June 1, 2015 by Representative Chris Gibson (R-NY) and Representative Joe Courtney (D-CT). The bill seeks to address a major crisis facing American agriculture: Not enough young people are becoming farmers. As the majority of existing farmers near retirement (the average age of the American farmer is 58), we will need at least 100,000 new farmers to take their place. But between 2007 and 2012, the number of young farmers increased by only 1,220.

The Young Farmer Success Act of 2015 would incentivize farming as a career by adding farmers to the Public Service Loan Forgiveness Program, an existing program that currently includes professions such as government service, teaching, and nursing. Under the program, public service professionals who make 10 years of income-driven student loan payments would have the balance of their loans forgiven. 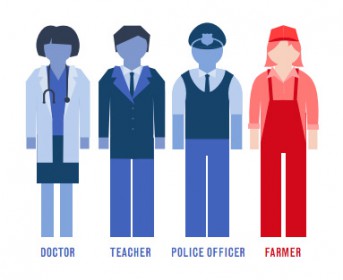 As Representative Gibson explains, farmers provide a service every bit as valuable as other professions currently covered by the program.

“Our farmers not only generate vital economic activity in every state, they produce our food and fiber and protect the rural landscape as true public servants,” Gibson said. “This common-sense legislation makes it far easier for our college graduates to return to the family farm or begin production on land of their own, safeguarding a way of life that sustains our nation.”

Farming is an expensive business to enter, in part because of skyrocketing land prices, and beginning farmers often face small profits or even losses in their first years of business. In 2011, the National Young Farmers Coalition (NYFC) conducted a survey of 1,000 young farmers and found that 78% of respondents struggled with a lack of capital. A 2014 NYFC survey of 700 young farmers with student loan debt found that the average burden of student loans was $35,000 and that 53% of respondents are currently farming but have a hard time making their student loan payments, while another 30% are interested in farming but haven’t pursued it as a career because their salary as a farmer wouldn’t be enough to cover their student loan payments.

“To reinvigorate our agricultural workforce, we must invest in a new generation of farmers,” Representative Courtney said. “Skyrocketing higher education costs and a growing student loan debt burden are thwarting young farmers from purchasing farming operations. This needed legislation would assist new farmers during the costly, initial phases of starting up farms and would increase the stock of new farmers to meet our nation’s growing agriculture needs.” 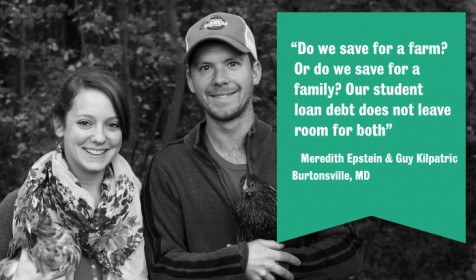 According to NYFC executive director and cofounder, Lindsey Lusher Shute, who is herself a young farmer, House Bill 2590 has broad support from nearly 100 farming organizations, including National Farmers Union, FFA, and Farm Aid.

“We are extremely proud of the coalition that has come together in support of this bill, and grateful for champions like Representative Gibson and Representative Courtney,” Lusher Shute said. “If we want to support rural economies and feed our nation, not just for the next five years but for the next five generations and beyond, we must make recruiting young farmers a top priority.”

House Bill 2590 will be considered as part of the reauthorization of the Higher Education Act, which is the legislation that houses the Public Service Loan Forgiveness Program.

In the meantime, farmers like Epstein will continue to pursue off-farm jobs while paying down their student loan debt, hoping for a day when they can start a farm of their own.

“I teach beginning farmers at the University of Maryland’s Institute of Applied Agriculture, preparing students to go out and achieve the dream that I can’t,” she said. “I hope that their student debt doesn’t put them in the same position I’m in.”

Send your Representative an email today,

I know what you are thinking – you don’t have time for this button. But why take that chance when there’s so much at stake? Even one email can make a big difference.