Although we don’t often discuss it, one of the largest ways that the government and US farming community interact are through crop insurance. NYFC focuses on highlighting and reforming the many programs and institutions that play a big role in beginning farmers’ lives, and for most – in particular for first-generation farmers – crop insurance isn’t high on that list. But we can’t ignore crop insurance programs completely, especially when it becomes such a big part of the national discourse on the USDA.

For that reason, we’re thrilled to report that our friends at the Land Stewardship Project have released a  new three-part report, “Crop Insurance – How a Safety Net Became a Farm Policy Disaster.”

The report brings to light some of the systemic issues of the crop insurance program, namely that despite its large pricetag, much of that support actually goes to large agricultural corporations. In fact, one incidental effect is to make it more difficult for beginning farmers, by artificially increasing land prices. Broken down into three papers, the report lays out:

“The Corporate Connection”: The actual crop insurance that farmers get is provided by private companies that sell policies and make a profit off them. These include corporations like the American Farm Bureau Insurance Services and Archer Daniels Midland Crop Risk Services. Since it’s mandate 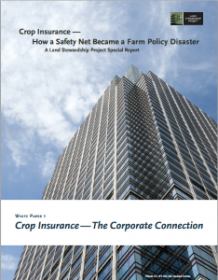 d that insurance be available for all qualified farmers, the federal government subsidizes the premiums to make it more appealing to insure even higher-risk farmers. In fact, about 72% of the federal program goes to premium subsidies, for a total cost of $42.1 billion between 2003 and 2012. Because of that public subsidy, these companies get to push much of the actual financial risk off on the taxpayers, while making a healthy profit. According to LSP’s research, those profit margins far exceed what is considereda reasonable rate of return.

You can read the full white paper here: The Corporate Connection. 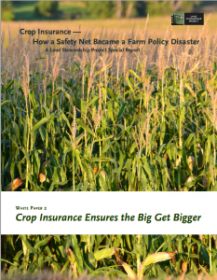 “Crop Insurance Ensures the Big Get Bigger”: One effect of crop insurance’s implementation is that more and more money is funneled to large farming corporations, which not only means that public money is disproportionally funding the wealthiest companies, but also that those corporations have an unfair advantage over smaller farm operations. In the words of the report, “Crop insurance has become a primary vehicle for using public funds to concentrate agricultural wealth in our country.”

For example, a breakdown of the numbers for 2011 show 2.3% of the nation’s farmers took in half of all premium subsidies for that year. In fact, the top 26 operations took in over $1 million each in premium subsidies.

You can read the full white paper here: Crop Insurance Ensures the Big Get Bigger. 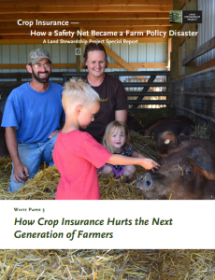 “How Crop Insurance Hurts the Next Generation of Farmers”: One impact of these narrowing of crop insurance dollars to a handful of large companies means that small operations – and especially beginning farmers – can get squeezed out. Crop insurance can actually ensure a steady supply of easy money for those corporations to artificially bid up land contracts, leading to high land prices and cash rental rates that price out those operations that don’t have an inside tract. LSP’s white paper looks at the state of Minnesota as a sample study, showing the role that insurance plays in limiting access to land and capital.

You can read the full white paper here: How Crop Insurance Hurts the Next Generation of Farmers.

To conclude its analysis, LSP has also put out a helpful “Principles of Reform” that lay out what changes are needed to get this program back on track. This call to action pushes for changing the program to make it a true risk-management program, not just a subsidy for large corporations; making sure the program supports the next generation of farmers; and making sure crop insurance is a fiscally sound government initiative. Read the full paper here: Principles of Reform.

To be clear, the goals of the crop insurance program are in the public interest, and federal government support of diverse risk management strategies is good policy. But this groundbreaking analysis from the Land Stewardship Program shows that some fundamental restructuring is needed to make sure this program does what it sets out to do: support the average American farmer and ensure the long-term viability of our nation’s food system. We’re grateful to LSP for putting this together, and look forward to working with them and with farmers across the country to push for positive change.

The Land Stewardship Program, founded in 1982, works to encourage an ethic of stewardship for farmland and to promote sustainable agriculture and communities. You can find out more about their work on their website.