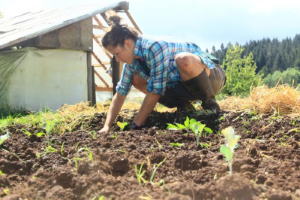 Farming is a tough business, and beginning farmers need hands-on experience and mentoring before they can successfully take on a commercial operation. Finding that experience and mentoring can be a significant challenge, and it’s at the heart of why Rogue Farm Corps (RFC) was created. The Oregon-based nonprofit was founded in 2003 by first generation organic farmers in their twenties and thirties who themselves had been mentored and considered it critical to their success. They noticed that many older farmers were retiring without anyone to take over their businesses, while young, inexperienced farmers didn’t know how to get started in commercial farming. RFC’s Executive Director Stu O’Neill says the organization was born from the desire to give beginning farmers access to mentors and in-field training.

Today, RFC’s FarmsNext program is a full-season, immersive farm internship program geared towards aspiring farmers with little or no experience. But placing interns on farms isn’t simply a matter of making introductions. After receiving a federal grant to start the FarmsNext program in 2006, RFC began placing interns throughout Oregon’s Little Applegate Valley. As the curriculum developed, it became clear that potential legal complications with farm intern labor were causing some established farmers to hesitate to bring on interns. Farm intern lawsuits over wage claims—including a suit on one of RFC’s original farms—had left the Oregon farming community confused and concerned about having interns on their property. RFC recognized that there were larger questions surrounding workforce education and farm labor that needed to be addressed, and the organization needed a strategy to prepare both their students and host farms for these conversations.

In 2010, RFC met with officials from Oregon’s Department of Agriculture, Bureau of Labor and Industries, and various other stakeholder groups to present the FarmsNext curriculum and explore how to make legal, accredited on-farm internships work for Oregon’s farmers. “We thought, let’s do it from the bottom up, not the top down. Let’s start in the community,” says O’Neill. RCF began working closely with Maud Powell, an instructor with Oregon State University’s (OSU) Small Farms Program and co-owner of Wolf Gulch Farm, one of RCF’s original host sites. Powell helped RCF forge a relationship with the Professional Skills faculty at Rogue Community College (RCC), whose classes cover topics like workers compensation law and tax reporting; issues critical to small businesses with varying employee types. RCC shared their job training and evaluation curriculum models with RFC, helping them to use workforce training and education to address pressing legal questions about on-farm interns. At first, FarmsNext students were required to enroll in RCC’s professional training course. Overtime, RFC created its own professional development classes, modeled after RCC and OSU. Three years ago, RFC staff incorporated the classes into their FarmsNext curriculum, allowing them to fit structured, legal workforce education into the seasonal flow of on-farm training life.

After addressing the legal uncertainties of farm intern labor through integrated workforce training courses, more Oregon farming communities took interest in the FarmsNext program. In 2012, farmers in the South Willamette Valley approached RFC about starting a farm internship program in their area. The collaboration led to the South Willamette Chapter, which hosted its first batch of students in the 2014 growing season. Last year, the FarmsNext program hosted 13 students on eight host farms. With the addition of Portland and Central Oregon RFC chapters, the 2015 growing season boasts 18 farms and the capacity to host up to 35 students.

The FarmsNext program provides inexperienced farmers with six to nine months of hands-on training in vegetable, herb, seed, and flower production, raising livestock, dairying, and agri-tourism and marketing. O’Neill says one of RFC’s over-arching goals is to prepare students to operate stable, financially viable farms. “Financial viability is critical to success,” he says. “Students are paired with commercial, for-profit farmers whose financial risk is very real.” Yet for many beginning farmers, one growing season isn’t enough to prepare them for the financial realities of farming.

O’Neill says this led RFC to develop the FarmsNOW program; a two season advanced internship for graduates of the FarmsNext program and for new incoming students who already have at least two years of farming experience. FarmsNOW will pilot in the 2015 growing season on two farms in the Rogue Valley and Willamette chapters. RFC again utilized their relationship with OSU’s Small Farms Program to develop additional business courses for the FarmsNOW curriculum, which is specifically designed for students who are seeking managerial farm positions or want to run their own farm. O’Neill says a goal of the FarmsNOW program is to have second year students mentor first year students, allowing them to pass on the knowledge they’ve received and further prepare for running their own farms. In two years, when the first grads of the FarmsNOW program are ready to work, RFC knows a local agricultural network—like incubator farms—will be ready and waiting for competent, prepared workers.

For nearly 12 years, RFC has been working on one of our most pressing agricultural issues: how to provide beginning farmers with the training and mentoring they need to take over financially viable operations from an older generation. Students from all over the country are encouraged to participate in their legal, structured farmer education programs. With the addition of the FarmsNOW program, RFC students have the opportunity to spend up to three growing seasons preparing for their future as farmers. The challenges to beginning farmers continue to be significant—especially, O’Neill notes, regarding access to land and capital, but he says that slowly, attitudes are shifting. “There are broader conversations happening about food systems planning and food systems thinking, and more honest conversations about financial viability in small-scale farms,” says O’Neill. “Little by little, piece by piece, we’re making an impact.”

RFC plans to continue to grow its programs and work with network partners like OSU to expand their curriculum. The nonprofit is also working with Friends of Family Farms on their iFarm Oregon project, which connects land seekers to land holders through their online database. According to O’Neill, RFC’s success has hinged on community: “We had no template to work from. We needed to put it together, piece by piece; never get too big too fast. We have to always build the community first and then build the program. When I think about what we really do—we build community.”

Rogue Farm Corps is now accepting applications for the FarmsNext and FarmsNOW programs for the 2015 growing season. Visit RFC’s website for application details.