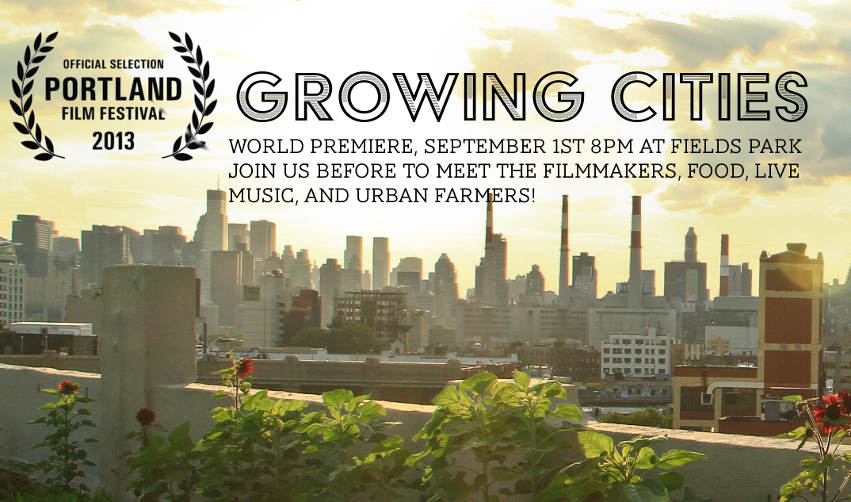 Our friends Dan Susman and Andrew Monbouquette of Growing Cities are premiering their film, three years in the making, at the Portland Film Festival this Sunday, September 1st (8pm) at The Fields Park, NW 10th and Overton. We first covered their process filming the urban agriculture revolution last April on the blog, and have excitedly anticipated this release ever since.

The film follows the two young filmmakers as they travel cross-country visiting folks transforming their cities one backyard chicken and rooftop garden at a time. “Everyone is really tired of hearing about all the problems with our food system,” says first-time feature director Dan Susman, age 25.  “So we figured it was time to show off the people who were doing something positive, right in their own backyards.”

Growing Cities is the first film to shed light on the urban agriculture movement on a national level. The film, blissfully positive and covering diverse ground, shows viewers that everyone has the potential to positively impact the food system regardless of where they live or what their past experiences are.

Here at NYFC, we believe the film will inspire young people to consider farming, whether it’s in a city or in the country, and are working with Growing Cities to provide resources for these aspiring farmers to accompany the film.

So if you’re in the Portland area, don’t miss the premier! And if you’d like to work with us to organize a screening in your region, email organizing@youngfarmers.org.

To learn more about the film you can visit the project’s website: growingcitiesmovie.com