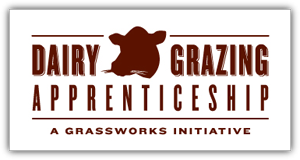 In Wisconsin, as in most of the country, the path to becoming a teacher or a lawyer is well defined. But suppose you want to become a dairy farmer without a farm to inherit: That career path is less certain. And, with an aging population of farmers, it’s more important than ever to educate the next generation of ranchers. Many farms without successors are being sold to become large animal confinement operations. Wisconsin’s Bureau of Apprenticeship Standards and GrassWorks Inc, a non-profit that provides leadership, education and resources for grass-based farmers, are offering an alternative. Their apprenticeship program is graduating a group of beginning ranchers trained in “managed grazing” and ready to own their own dairy farms.

The Grassworks Apprenticeship Program, thanks to funding from the USDA’s Beginning Farmer and Rancher Development Program (BFRDP,) hires beginning ranchers to work for a “Master Dairy Grazier” for a two-year, 4000 paid-hours program that includes 288 hours of off-farm instruction, from classes in technical schools to training on herd nutrition and holistic management. During these two years, the apprentices are working towards their goal of farm ownership, whether it is moving into an equity earning system or initiating a farm transfer. Program manager Joe Tomandl reports these individual farm businesses based on managed grazing “…have real success, and they make money. They keep local communities going. They make upper middle class business people and a lot of quality jobs. There’s a real potential for rural economic development here too. And that isn’t saying anything about the environmental benefits.”

Nate Weisenfeld, one of the 11 apprentices in the 2010-12 cohort, fell in love with agriculture on his grandparent’s dairy farm. He worked on a dairy while earning a degree in dairy science and, after graduation, began buying a half-calf each paycheck instead of being paid in cash. After four years he was able to leave the dairy and start milking his own cows. In 2010, he bought a house and 80 acres. Nate serves as a model beginning rancher for the Grassworks Apprenticeship Program. Although he was on track to starting his own business before participating in the program, he has benefited greatly from its resources, especially the network. This summer, when he had some issues he was able to call upon the group for help. “I have a whole Rolodex of experienced farmers… They come out in the field, walk through the pastures and say ‘Here is what I think.’”

Without the BFRDP and the Grassworks Apprenticeship Program, Nate believes he would be working at a factory punching a button. Nate struggled with obtaining loans from regular commercial banks before receiving training from the program. Starting a farm is just too difficult to do alone, he says “It’s absolutely crucial that we have this program.”

Have you signed the petition to support a better Farm Bill?  It’s not too late: sign up now.