Farmers of the Southeast have found the time in between a whirlwind of sowing and harvesting in the past few months to come together into the Southeast Young and Beginning Farmers Coalition! After a fantastic inaugural meeting earlier this Spring, NYFC spoke with Olivia Sargeant of Farm 255 and Moonshine Meats – and an integral organizer of the nascent group – about this new project and what’s in store for the future.

NYFC: Tell us about the initial meeting that you all had in Georgia – what was the energy like, and what are people excited about for the future of the group?

OS: Our initial meet-up in Georgia was extremely well-received – it seems as though folks are eager to gather and share experiences. We had around 200 RSVPs and over 150 people show up, which for farmers at the onset of the season is no small feat. Food was donated by Farm 255 (a co-sponsor for the event), The National restaurant, and beer provided by Terrapin Brewery, our local brewmasters in Athens. A number of folk came from Atlanta and the Darnell Boys set the tone with their rootsy Americana and blues-inspired music. It was an extremely festive, fun, loud event that lasted late and ended with an impromptu work songs session let by Max Godfrey who spent last summer interning with Creek and Bennett at Sylvester Manor on Shelter Island. Pretty great. We will be hosting similar events in various locations in the southeast with the next ones to be most likely in Montgomery, AL and Atlanta, GA. 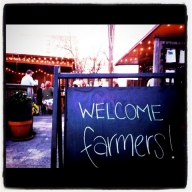 NYFC: What was the impetus for wanting to organize? Why do you feel a young/beginning farmers’ group will help?

OS: The impetus has been to mimic the energy and spirit of groups such as the Greenhorns to begin to develop a voice for the young farmers of our region. The south has little to offer in the way of collective organizing, and so there is a great need to be filled. The future will be dictated by the stakeholders that step forth to help shape it. We hope to work closely with the NYFC so as to not just be spirit captains for beginning farmers, but to be able to prove real resources and education as well. We’d like to build the minds of this group — in addition to their capacities in the field, we must be savvy and educated and active and civic-minded as well. Farming is, quite simply, not enough.

NYFC: A lot of other farmers out there are thinking about organizing in their areas. Could you explain what work went into organizing for that initial meeting?

OS: Organizing works best when it’s done on gut: using resources that seem obvious and easy, i.e. personal contacts. Not being afraid to ask for participation from a large group of people. Understanding people’s limitations and capacities and natural skills and profiting from what they do best, not just what tasks need to be done or what elements secured. Our route will be one of partnerships, as we believe that collaborations between organizations and groups that are already working in the sector is more important for effectuating policy change and providing resources rather than clinging to an individual identity of our nascent association – i.e. building on the strength and hard work of others that come before you.

Also I would advise to almost always preference fun over seriousness, especially at beginning phases. Lure folks with food and drink and sick’em with farm bill facts once they’re in the door. And as far as work goes, it’s always good to work in a team, clearly divide labor, stay organized. Find a location to host you that is minimal in terms of infrastructure – the more they have ready to go the better, for your first run. Find restaurants that love farmers and ask them to donate. Ask many instead of one or two so that each one is only required to provide a small amount. Create social media immediately but not if you don’t have someone willing to manage it well. Collect contacts and use excel. Be savvy and serious.

NYFC: What are some of the goals you would like to see the group accomplish in the future?

OS: I’d like to see us create and express a good balance between community camaraderie and action-based organizing. Connecting farmers to each other I think is the most important first step to encourage new folk to join the ranks, and bolstering those currently farming. I’d like to help farmers feel as though they are a part of something much bigger than just themselves, their fields, their hoop houses, their seed catalogues, etc. 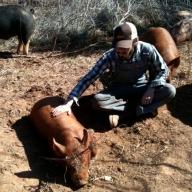 NYFC: The entire southeast is a lot of territory! Did you feel that it is important for farmers in the southeast to be one unified entity? Does that group as a whole face certain issues?

OS: Southern prides stretches long and deep and I wanted to profit from the cultural reality of the region. There are not numerous resources or organizations working in the southeast on these issues, and very very few working regionally and so unifying the area, (which yes, sees similar agricultural issues despite a variety of terrains and climates) feels important. But really I’m banking on the cultural connection between beginning southern farmers as the tie between participants.

NYFC: What is the plan for how the organization will grow? You’ve got a couple more meetings planned for other parts of the Southeast, right?s

OS: Yes – mixers across the southeast, partnerships with other orgs already working in the sector, and letting these partnerships help guide where we go next. We’re not at practical concrete projects yet besides building a voice and momentum and offering a group of fellow farmers for folks to feel a part of. We’d rather let ideas come forth when serious stakeholders have put their hands in to help formulate. But we’d like to work closely with the NYFC to represent the south in their work and act as a connector to our region, as policy reform is definitely one of the few spoken goals we do have.