The past couple of months have been a whirlwind of activity in Oregon as the Friends of Family Farmers (FoFF), a grassroots organization dedicated to promoting socially responsible farming in Oregon, began FarmOn!, a project for beginning farmers.  FarmOn!, an affiliate of NYFC, works to build links within the young and beginning farmer community by creating face-to-face connections to promote learning, friendship, and inspiration between farmers.  It also functions as a way for farmers to plug into the national movement and learn more about the national issues that affect them.

The impetus for the group arose through FoFF’s listening sessions, where farmers all across the state “routinely brought up the hot topic of needing more of a focus on the next generation of farmers,” according to Leah Rodgers, FoFF Field Director.  It also goes hand-in-hand with I-Farm, FoFF’s online directory of state farming opportunities.  One of the project’s main goals is to allow new farmers to connect with other farmers and the larger movement on a nation-wide level.

How Does It Work?

FoFF coordinates the project with the goal of having it be as DIY as possible, with the energy coming from the actual beginning farmers engaged in it.  FoFF provides networking capability, resources- such as event hosts, experts for educational trainings, etc – and an online forum for feedback on how beginning farmers want to see the project grow.

The Washington Young Farmers Coalition, also associated with NYFC, has also connected with their neighbors to the south: The WAYFC and FoFF co-hosted the second FarmOn! event, an apple-cider mixer this past Friday.

How Has the Response Been? 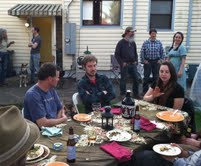 Fantastic!  As Friends of Farmily Farmers prepared for the first FarmOn! potluck, they found among farmers an incredible amount of “eagerness to get involved, connect, and network with each other,” according to Rodgers.  Beginning Oregon farmers were ready and excited for this project to happen.  The first potluck brought out an amazingly diverse community – a range of ages and both urban and more rural farmers.  Many in the older farming generation have expressed an enthusiasm for plugging in and connecting with the next generation.

As the group’s desires refined, certain key issues coalesced that it hopes to address.  These include opportunities to learn skills through on-farm technical training, development (and official legalization!) of crop mobs, and further workshops on issues as diverse as business management and grant-writing, among other things.

FarmOn! will continue to grow with the combined energy, enthusiasm, and hope of Oregon’s next generation of agrarians.  To learn more about it and to subscribe to the listserve, visit the FarmOn! website.