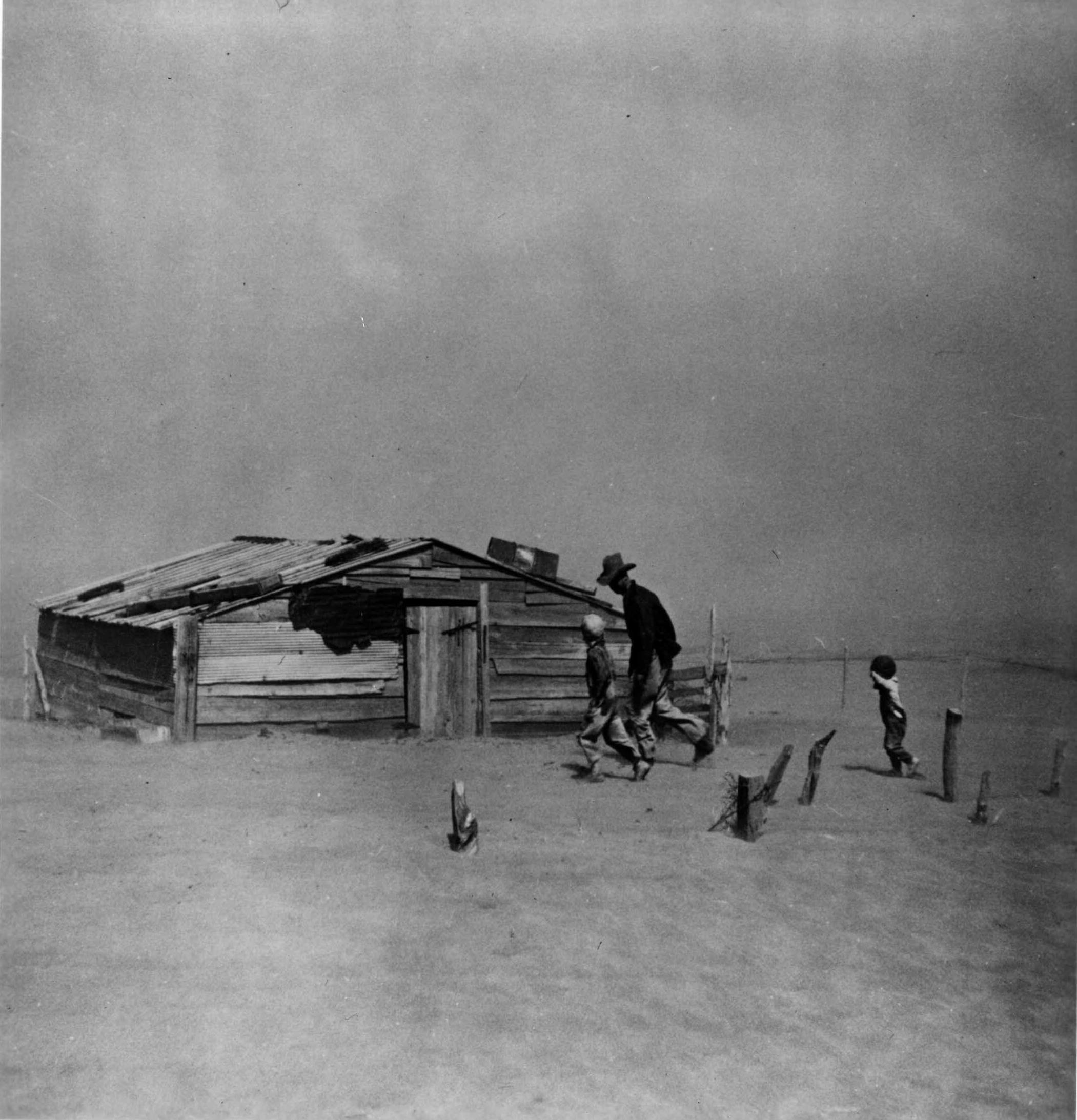 The first farm bill was crafted in 1933: a time of plunging crop prices, dust storms, and a burgeoning Depression. At the time, over 20 percent of working Americans were farmers, and 80 percent of farms were smaller than 175 acres.

The U.S. agricultural economy had grown in the post-WWI years, bolstered by demand from economically devastated European nations. In those boom years the American prairie fell to herd and plow, aided by new agricultural mechanization technology.

As the European economy recovered demand for U.S. farm goods fell and prices sagged. American farmers, however, maintained production levels, creating a surplus that further depressed prices. At the same time consecutive years of drought dried stressed, over-tilled topsoil to dust and blew it across the country in “black blizzards” that reached the nation’s capital. From 1929 to 1932, gross farm income dropped 52 percent to just 40 percent of urban incomes (at a time when there was 30 percent urban unemployment).

Franklin D. Roosevelt charged his Secretary of Agriculture, Henry Wallace, with the task of rescuing the agricultural economy. Wallace (who, on an unrelated note, has a melon named after him in China) drafted the Agricultural Adjustment Act of 1933. The Act strengthened the failing farm economy by paying subsidies to farmers to fallow their land, setting mandatory minimum prices for agricultural products, and developing storage systems to regulate the flow of grain onto the market (and thus level price fluctuations).

Wallace also took the drastic and unpopular action of purchasing and slaughtering six million pigs and paying farmers to plow under ten million acres of cotton. Wallace mollified critics by establishing the Federal Surplus Relief Corporation to direct surpluses to relief efforts. In 1935, an Amendment to the Agricultural Adjustment Act allowed for the appropriation of funds to purchase surplus agricultural products for food relief. In the same year, the Soil Conservation Act created the Soil Conservation Service, which paid farmers to implement soil conservation practices including cover crops, contour plowing and crop rotation.

The latter half of the 1930s saw gradual economic improvements in the agriculture sector, due to the efforts of the FDR administration. From 1933- 1936, farm incomes doubled. However, the benefits disproportionately went to large farmers, causing the consolidation of farmland and the exodus of at least three million small farmers from the land.

Doubtless, some of the young men of the dust bowl diaspora found themselves in the Civilian Conservation Corps, who in 1938 were deployed across the great plains region to re-plow the land into furrows and plant shelterbelts of native trees, resulting in a 65 percent reduction in soil erosion. The rains returned the following year, ending the nine-year drought.

Also in 1939, the first Food Stamp Program was instituted, designed to address hunger while continuing to draw down the agricultural surplus. Families could purchase orange coupons (or ‘stamps’) and receive 50 cents worth of blue stamps for every dollar of orange stamps purchased. The blue stamps could be used to buy only government-designated surplus food items. At its peak, four million Americans were enrolled in the Food Stamp Program, which was eliminated in 1943 when the economy received a boost from WWII.

The 1930s established the precedent for the system of price supports and subsidies that would inform later agricultural policy, but it is worth noting some contrasts. In the 1930s, prices were controlled by limits on production, whereas later legislation would turn toward the opening of markets to inflate prices. Also, the first agricultural subsidies were tied to conservation, while later legislation would decouple subsidies from conservation and instead tie them to production, bringing conservation back into the farm bill under a separate title and thus making it more vulnerable to cuts.

The 1930s also helped to set in motion the steady consolidation of farmland into the hands of the few, as policies did little to protect tenant farmers, sharecroppers, and the smallest family farms—a trend that would later be compounded in the 1940s-1970s by advances in farm mechanization and increasing political support for industrialized agriculture, the period covered in the next Field Guide to the Farm Bill.

Kittredge, Jack. “A Brief History of the Farm Bill” The Natural Farmer, Fall 2011.